Trey Parker and Matt Stone received death threats after announcing that Muhammad would be appearing on an episode of South Park, so the network scrubbed the episode of anything remotely offensive in order to avoid becoming a target.

The writers for that week's episode of The Simpsons sympathized with Stone and Parker, acknowledging that criticizing Islam is simply too dangerous: 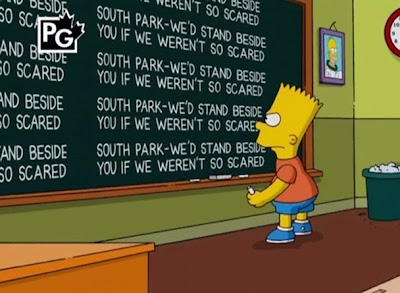 Likewise, Penn Jillette (of the comedy duo "Penn and Teller") said that he and Teller won't mock Islam because they "have families."

Now the great Michael Palin is admitting that he's afraid to make fun of Islam.

Daily Mail—During his Monty Python days he poked fun at everyone from the Establishment to Christianity.

But thanks to the threat of ‘heavily armed’ fanatics, Michael Palin has admitted there is one comedy taboo he is too scared to break - Islam.

The 70-year-old said religious sensitivities have increased so much since his comedy days it would now be impossible to make 1979 film Life of Brian - which satirised the life of Jesus - let alone laugh at Muslims.

He said: ‘Religion is more difficult to talk about. I don’t think we could do Life of Brian any more. A parody of Islam would be even harder.

‘We all saw what happened to Salman Rushdie and none of us want to get into all that. It’s a pity but that’s the way it is. There are people out there without a sense of humour and they’re heavily armed.’

In 1989, Mr Rushdie was forced into hiding after the Supreme Leader of Iran, Ayatollah Ruhollah Khomeini, issued a fatwa calling for him to be killed in revenge for his novel The Satanic Verses. (Continue Reading.)


Of course, comedians and comedy writers aren't the only ones who have admitted their fear of Islam. During a Question and Answer session, textual critic Bart Ehrman said that the reason he doesn't write about the Qur'an the way he writes about the Bible is that he values is life:


Will Muslim organizations like CAIR and ISNA condemn Palin, Ehrman, and others as "Islamophobes" and "bigots" for saying that it's too dangerous to criticize Islam? Or is the silencing of critics precisely the goal of these organizations?

For more on this topic, be sure to watch "Don't Make Fun of Muhammad."
Posted by David Wood at 2:57 PM

Islam is against Terrorism Terrorists are not following Islam. Allah says in Quran whoever kills a soul unless it is as though he has killed all mankind. Muslims Are Not Terrorists and whoever saves one life it is as if he had saved mankind entirely.