When U.S lawmakers introduce bills permanently banning the application of Sharia penalties where Sharia would conflict with U.S. laws, the media assures us that Sharia is benign and that it's only a matter of daily prayers, fasting, and so on. Yet whenever a nation adopts Sharia, suddenly the nation's leaders know that Sharia includes stoning for adulterers, amputations for thieves, etc. How can Sharia be so unclear to us and so incredibly clear to Muslim leaders? 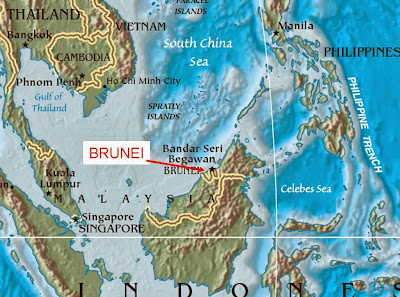 The code - to apply only to Muslims - is expected to introduce death by stoning for adulterers and the severing of limbs for theft.

Brunei already adheres to a stronger form of Islamic law than neighbouring Malaysia and Indonesia, banning the sale and consumption of alcohol.

The new code, to be enforced in six months, will strengthen that policy.

Punishments could also include flogging for such crimes as consumption of alcohol or abortion, according to a copy of the code seen by news agency AFP.

Sultan Hassanal Bolkiah, 67, who is one of the world's wealthiest men, introduced the code, calling it "a part of the great history of our nation".

The sultan had already made religious education compulsory for Muslim children and ordered businesses to close during Friday prayers.

But until now, Brunei's Sharia courts were limited to family matters like marriage and inheritance.

Its civil courts are based on British law, a leftover from the sultanate's days as a British protectorate.

Brunei's citizens have one of the highest standards of living in Asia, thanks to revenues from oil and gas, and enjoy free medical care and education.

The sultan pledged the new code would not change his country's policies and officials have said in the past judges would be given discretion in sentencing.

The code is to be applied only to Muslims, who make up about two-thirds of a population of 420,000.