Why do so many Muslim converts, from so many different parts of the world, somehow come to believe that their new religion (unlike their old religion) commands them to kill in the name of Allah? Why aren't "moderate" Muslim organizations doing more to prevent these converts from being radicalized by Muhammad's teachings? 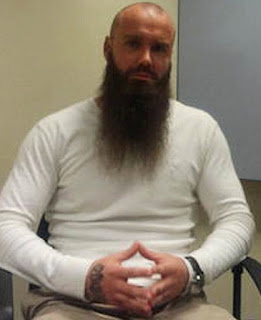 The Sun—A White Muslim convert walked into a police station and told cops he was going to kill Prince Harry, it was revealed last night.

Ashraf Islam made his chilling threat a day after the murder of soldier Lee Rigby in Woolwich, South London.

Islam, 30, is now facing ten years in jail after admitting threatening to kill soldier Harry, 28, who is third in line to the throne.

Anti-terror cops were called in to investigate after Islam’s threats on Thursday, May 23, and security around the royal was stepped up.

His internet history is also said to show he had been on terrorist and firearms websites.

Apache helicopter pilot Harry served in Afghanistan as an on-ground air controller with The Household Cavalry in 2008. He also served there with 662 Squadron Army Air Corps until January. (Source)

He walked into a POLICE STATION and said that? doesn't surprise me, muslims are notoriously incompetent

Muhammed, Khaibar; Accepts food from a woman he just raped after torturing and killing her family, he is poisoned and succumbs to his fate.

Failure and stupidity, the legacy of muhammed.

Hopefully this is going to be the new wave in terrorism - turning yourself in and confessing BEFORE you commit a terrorist act. I guess this dope just got confused as to the sequence of events that were to transpire in a terrorist murder plot.

He doesn't seem to be a very good terrorist.

All a bit strange. He is homeless apparently which could be motivation for making a threat with 100% guarantee of bed and board at taxpayers expense.

He is not being treated as a terrorist and has only been charged under Section 16 of the Offences against the Person Act.

But Islam has NOTHING to do with these kinds of acts!! lol... how much more black and white can you get? and where are all the "peaceful' muslims protest about this stuff? Where? lol.

Thanks Jay Bee - with those parts of the equation it makes a bit more sense now. It certainly raises the question of how his fellow Muslims could allow him to arrive at a state of such desperation that he would stoop to seeking food and shelter through such tactics, especially since many in the Muslim community are feasting on the public dole, sort of a secular zakat.

I thought he was a member of ZZTop!

Once again..ANOTHER convert to Islam who is crazy and wants to kill...This is a recurring theme.

This is proof enough that Islam is a dangerous cult if so many converts are killing and plotting terrorism.

Good for him. That's 30 years of free food & shelter. Bet he wouldn't ask for parole.

Ever wonder why the bust of this great man was removed from the Oval, once Obama took office?

Mr Islam should get 10 minutes with His Highness in hand-to-hand, and we'll just see who does what.

TPaul - Great Churchill quote. Thanks. Am reading The Gathering Storm. History is repeating itself.

Very sad about his bust going missing. But understandable.

What polar opposites. The greatest man of the 20th Century, Sir Winston won a Nobel Prize for literature - having actually accomplished something.

The other fella won the peace prize for the same things that got him elected: bovine scatology.