You know your religion's got problems when life is better under a brutal dictator. (For more on women in Islam, click here.) 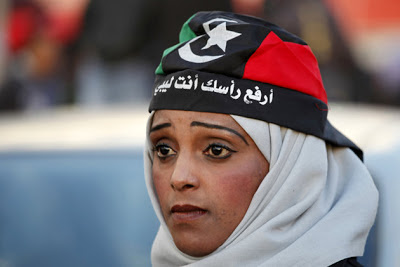 BENGHAZI, Libya (AP) — On her way back from her job as a lecturer at a university near Tripoli, Libyan poet Aicha Almagrabi was stopped by a group of bearded militiamen. They kicked her car, beat up her driver and threatened to do the same to her. Her offense: being alone in a car with men without a male relative as a guardian.

"You have violated the law of God," the militiamen told her, Almagrabi said.

"I said, I teach male students, so should I bring a male guardian with me to classroom?" she told The Associated Press.

Not that the university is immune to increasingly bold conservatives' views on the role of women. Almagrabi said one student recently told her she shouldn't be giving lectures because a woman's voice is "awra" — too intimate and shameful to be exposed in public.

The incident in February, which ended with the militiamen allowing Almagrabi to drive home, underlined the bitter irony for women in post-revolution Libya. Women played a major role in the 8-month civil war against dictator Moammar Gadhafi, massing for protests against his regime, selling jewelry to fund rebels, smuggling weapons across enemy lines to rebels.

But since Gadhafi's fall more than 18 months ago, women have been rewarded by seeing their rights hemmed in and restricted.

Women fear worse may yet to come. The country is soon to begin work drafting a new constitution, which activists fear will enshrine the relegation of women to second-class status, given the influence of hard-line Islamists.

"What we aim for right now is not to lose what we had," said Hanan al-Noussori, a lawyer in Libya's second biggest city, Benghazi. "I don't know which path we are heading in. But this is a matter of life or death for us." (Continue Reading.)

I came across this not to long ago. This is a Muslim womans blog who agrees that a womans voice is awra.

I couldnt believe what I was reading!

Her blog is a fascinating look into the mind of a brainwashed Muslimah.

Here is her opening statement.

The matter or whether the female voice is awrah and should not be heard in public is a problem that has been discussed at length by scholars throughout the ages. As a muslimah, I have sought guidance from the writings of scholars who have debated this point, but I have also studied this problem, both from a theological point of view, and also from a practical aspect.

After a lot of research on the voice, I have found that both sides have VERY strong arguments. But I have come to the conclusion that it is best to have taqwa and not converse with non-mahram men (Allah (swt) knows best), and here are the daleels which enabled me to reach that conclusion...

Looks like its a case of, "out of the frypan and into the fire"

Muslims always seem to be blind to their own history until it is too late, and then they have to repeat it. It should be a good lesson for the rest of us.

May Allah bless the Muslim sister who follows the orders of her Lord, aameen. May Allah guide all the Muslims to follow their Deen properly within moderate bounds, not going to extremes, aameen.