When U.S. citizens peacefully gathered to protest the planned construction of a 13-story mega-mosque on the site of the largest Islamic terrorist attack in U.S. history, politicians and the media declared the protest to be decisive proof of an American epidemic of racism, intolerance, bigotry, and Islamophobia. Meanwhile, in Indonesia, Muslims are shouting "Allahu Akbar!" as the government actively destroys churches, and Christians are powerless to defend themselves against the enforcement of Sharia. Will there be an international outcry? Don't hold your breath. For some reason, the people who are most vocal in claiming that Islam is no different from other religions are the same people who consistently hold Muslims to lower standards. (Click here for video.) 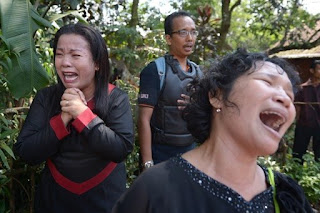 AFP--An Indonesian city government demolished a church in front of its weeping congregation Thursday, as Muslim protesters egged on workers and branded the Christians "infidels".

Dozens in the 100-strong congregation wailed as a digger tore down the brick walls, with worshippers accusing the government of "criminalising our religion", in a sign of increasing intolerance in the world's largest Muslim-majority nation.

"My heart is aching and I feel numb watching my church collapse. I went to this church for 11 years," Megarenta Sihite, 46, told AFP, wiping away tears as fellow worshippers, dressed in black, hugged each other.

"Our church can collapse but not our faith. We will continue to come here for Sunday mass." 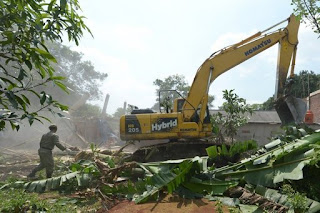 As the walls of the Taman Sari Batak Christian Protestant Church -- at the centre of a planning row -- crumbled, police in Bekasi city on the outskirts of Jakarta, dispersed 200 Muslim women who sneaked onto the church land chanting Koranic verses.

Along the road Muslim protesters held back by a police cordon had chanted "Knock the church down now", and "Allahu Akbar" (God is greater).

One man shouted through a loudspeaker: "They're infidels and they've built their church without permission."

Members of the congregation had earlier begged the Bekasi city government to halt the demolition, with children clutching signs reading "please do not dismantle our church".

Reverend Advent Nababan shed tears as the building was pulled down. "You just witnessed the government criminalising our religion," he said. (Continue Reading.)


If you'd like to learn about the reality of Jihad, click here.
Posted by David Wood at 1:22 PM

my deepest sympathy to these Christians! I see some muslims trying to say "those muslims aren't following our prophet." Where I constantly site the verse of the sword to them and see them squirm or shut up!

This is heartbreaking....
this is also the type of tribulation we need to look out for.

And they say Indonesia is a moderate muslim country!!

Keep strong my fellow Brothers and Sisters in Indonesia for "Our God Is Faithful".

I couldn't help but cry after seeing the faces of those Christians and think while wondering what they must be going through with all of the taunting, gloating, etc. those Muslims and the government must be pouring on over this victory they think they have. Ultimately, victory goes to those who put their faith in Christ, Jesus.

Definitely, my prayers go out to them. God prepares better things for us through out losses. Those people are correct when they say that their faith can't be taken away.

If Indonesia is already like this then it won't be long before my country Malaysia becomes like this. Please pray for the christians in both Indonesia and Malaysia that the gospel of Jesus Christ will prevail.

Most Indonesian moslems are ignorant of what Islam is teaching, but they have enmity toward the non muslims and Indonesian Chinese from decades of indoctrination from the government and also mosques. So they don't really mind if churches are attacked.

Also, the local governments in Bogor and Bekasi are lead by people from a Wahabi party. So anybody who wants to have support from the Wahabi party will pretend nothing is happening like the current president.

As sadistic as these and other acts are, I think they are signs of Moslem desperation. They know that the foundations of their faith are even shakier than the buildings they demolish and the lives they snuff out. People are doing their research. They are learning more about Mohammed, his perversions, his thievery, his murders, and it's becoming harder to maintain the illusion that he is a messenger of God. Moslems are defending a house of cards, and it's wobbling.

200 Muslim women walked through the site chanting Quranic verses...
How very triumphalist of them.

David, next time when you guys get an opportunity to debate a muslim apologist please make sure you bring these incidents up. If Islam and Christianity serve the same God then why will the government in an Islamic country sanction the destruction of a christian church.
Something is inherently wrong with Islam. I am not surprised because it is a cult and they practice doctrines of devils.

Satan has come to kill, steal and destroy, and we are truly seeing that with Islam. I felt so sad for those believers in Indonesia. We are truly living in the end of days, saints let us intensify our prayers so that those who are in the dark will see the light and come to the light and be saved.

Go to youtube and put in nicenecouncilcom. The title of the video is 'biblical satanism'.

It doesn't sound, at first, like it matches with your post but it so does because satan wants to imitate God and what better way to do it than to come up with islam?

Islam is a very callous and heartless religion. All they care about is domination. Can you imagine christians seeing children crying and still be showing signs of victory. I doubt it if these people were this heartless before the introduction of islam in their community. Islam would turn a normal thinking human beign into a beast who always wants to shed the blood of the innocent.
This is the height of intolerance. Islam is a very dangerous religion and all the followers have been seduced by satan itself.
To my brothers and sisters in Christ take heart you are the temple of the holy spirit and the building that was destroyed will be rebuilt bigger better and some of the people who rejoiced at the demolition will come to know the Lord and become full members of your congregation. This will come to pass in Jesus'name -- amen

Thanks for that information. I will look for the video on Youtube

Saints let us intensify our prayers for our brothers and sisters in Islamic countries who are being persecuted. God will avenge them.