At least one government in the world seems to be slowly catching on. Here's the story from The Australian: 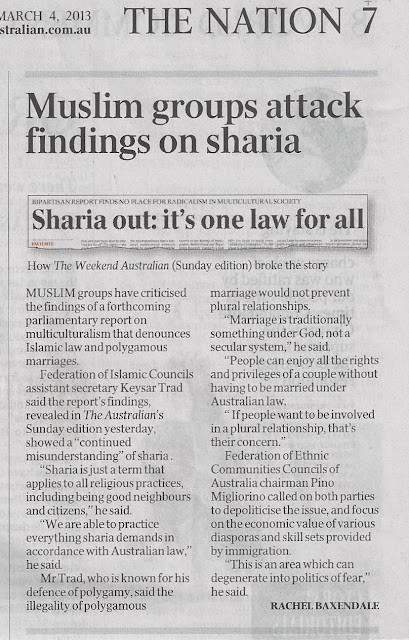 Here's more from The Australian:

Australia--Islamic law and polygamous marriages will be denounced as forever unacceptable in Australia in a bipartisan parliamentary report that will define what multiculturalism means for our nation, and state there must be only "one law for all".

The report -- the result of a two-year investigation into Australia's multicultural strategy -- is understood to be critical of the limited access migrants have to English language training and the lack of cultural awareness shown by employers and the federal employment recruitment agency.

It is also understood to make the recommendation that a national multicultural research centre be established, funded by the federal government and run independently. The centre's chief role will be to conduct research on how communities are integrating and identify their needs.

The committee believes too much crucial knowledge and information has been lost since John Howard abolished a similar body, known as the Bureau of Immigration, Multicultural and Population Research, leading to a lack of planning around how to integrate newly arrived racial communities.

Coalition MPs are also concerned Labor has been too keen to paint migrants and refugees as "victims" and wants to ensure that they agree only to a pathway of "integration".

The committee was confronted with a range of Islamic views, including a submission from the Australian Federation of Islamic Councils, which argued that Muslims should enjoy "legal pluralism".

In an interview, the organisation's president, Ikebal Adam Patel, who wrote the submission, nominated family law and specifically divorce as areas where moderate interpretations of sharia could co-exist within the Australian legal system. The multiculturalism review also received one submission calling for polygamous marriages to be considered.

The committee has come to the view these more radical ideas should be rejected, explaining that a multicultural society would not tolerate them.

The report is understood to discuss the issues Australia is encountering with Muslims and suggests: more work needs to be done to bridge cultural gaps; the promotion of inter-faith and inter-cultural understanding must be encouraged; and work with community leaders, organisations and institutions needs to be continued to foster awareness of the rights, obligations and responsibilities that apply to all in the Australian community.

The committee heard that Australians were comfortable with multiculturalism and racial diversity, but an overwhelming number of people expressed concerns Muslims were not integrating and were coming to Australia to impose their values.


Pamela Geller has more here.
Posted by David Wood at 8:38 AM

Good for Austrailia. I am moving to Austrailia, because at least the government gets it.

Sharia law and western values are incompatible by any stretch of the imagination. If moslems are so concerned about implementing Sharia law why don't they immigrate to Islamic countries like Afghanistan, Saudi Arabia, Pakistan etc, where they can fully practice Sharia law to its maximum capacity.

As a New Zealander, I know that my Australian Cousins are always prepared to stand up to Tyranny and to never back down! The 'Aussie Spirit' is still strong and you can rely on any Australian Government to stand up for Western values.
It's a shame that I can't say the same for Great Britain..