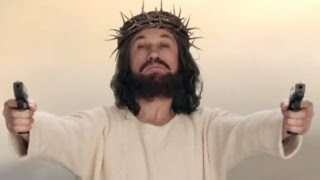 Just a few days into Lent, Saturday Night Live aired a spoof trailer for a new revenge film by Quentin Tarantino: "Djesus Uncrossed." The film depicts Jesus and his disciples going on a murderous rampage to avenge his crucifixion, and it stars Christoph Waltz as Jesus, Brad Pitt as Peter, Ving Rhames as Pilate, and Samuel L. Jackson as Judas.

Why are SNL writers (not to mention South Park writers, Simpsons writers, Family Guy writers, etc.) so comfortable portraying Jesus in any way they think might get a laugh? It's simple. Christians don't go on killing sprees when people mock our beliefs.

But suppose SNL were to broadcast a trailer called "Inglourious Basterds II: Remember Khaybar," in which a group of Jews brutally slaughter Muhammad and his companions for the attack on the Jewish settlement at Khaybar. (Alternatively, the film could be about revenge over the massacre of 600-900 Jews in Medina.) Can anyone seriously doubt that the resulting international bloodbath would be . . . well . . . more graphic than a Quentin Tarantino film?

Here's the great irony. The lovely folks over at NBC (and just about every other channel) constantly bombard us with the absurd notion that Islam is just like every other religion. Yet they show by their actions that they don't really believe this, and that they understand perfectly well that Islam is a violent and oppressive ideology.

Perhaps we should take this "Djesus Uncrossed" trailer as a backhanded compliment to Christianity: "We like making fun of you Christians because we know that you're as peaceful as we keep pretending Muslims are."


I guess the only thing we can do now is sit back and wait for Obama, Hillary, and others to demonstrate their consistency by publicly condemning "Djesus Uncrossed," just like they publicly condemned the Muhammad spoof "Innocence of Muslims." Perhaps the Obama Administration will even hunt down SNL writers and have them arrested, just as Sam Bacile was hunted down and arrested.

Or, will politicians and the media treat "Djesus Uncrossed" as a matter of free speech, rather than as a matter of national security? Why, then, treat videos or cartoons about Muhammad any differently, especially when all religions are supposedly the same?
Posted by David Wood at 12:40 AM

Since Islam and much of the world's media belong to "...the god of this world [Satan]" (John 14:30) as demonstrated by what they produce...

...it should come as no surprise that the media does not criticise Islam, because:

“Every kingdom divided against itself is brought to desolation... And if Satan casts out Satan, he is divided against himself. How then will his kingdom stand?” Mathew 12:25, 26

Wouldn't that also offend muslims becuase their version of jesus is a prophet?

Well I've always said that those socalled atheist/agnostic skeptics are like schoolyard bullies. They pick on the kid they know either will not or cannot fight back. But they leave the kid alone that they know will punch their teeth out if they dare mock him. And as a result of that they pretend that the kid that gets bullied deserves it, while the kid that would have their heads doesnt, although he makes the very same exclusive claims as the kid that gets bullied. But remember... Bullying is bad... Unless, of course the kid is a christian.

But ..but Muslims love Jesus also, so this should be offensive to the umma?

Finally a movie about the Muslim Jesus,

I still think a movie should be done about the Pre Incarnate Jesus in the Old Testament. Call it Jesus Christ the First and Last Action Hero.

"Wouldn't that also offend muslims becuase their version of jesus is a prophet?"

Muslims always tell me, the Jesus of the bible "is so week, he allowed himself to be captured by Joosh, and he didn't fight the Romans."

So this must be the real Islamic Jesus.

@ Radical,
lol you right! muslims should be happy about this because it's isa lol, or should they march on the street to protest as well, since they treat all the prophets the same?

They should have called it "Isa Uncrossed" though.

But then again, muslims would probably have responded in violence lol

Radical you do got a point there.
Im just saying because if this would of been about mohammad, muslims would start chimping out.

about 20 years ago the french version of snl did the same skit: the story of jesus, played by sylvester stallone. i didn't think either version was so funny. but i thought the snl episode from feb. 2, with adam levine, was the jewiest, blackest, gayest, most funny episode ever. i guess my point is, is it funny?

Funny thing, if they put instead of Jesus Muhamed as a maniacal revenger, it would not even be funny - it would be more or less accurate portrait of the founder of so called "peacefull" religion.

The sight of Jesus in that video massacring people is so absurd -- as the sketch writers themselves understood -- that it becomes funny. But the hilarity might make Muslims uncomfortable, because to show Muhammad massacring people would not be absurd and funny -- it would be all too real. Muhammad would fit only too naturally into a brutal Tarantino film. So this Djesus video uncomfortably highlights the way in which Jesus and Muhammad are poles apart: one is astoundingly benign, the other a mass murderer.

You have got to read God's Battalions: The Case for the Crusades by Rodney Stark. If you haven't read that yet pick it up. It will enlighten you on several ideas about Islam. It makes the claim that the Crusades were a necessary defensive action against the encroachments of Islam into the West. He also counters other things often taught in high school world history texts. One in particular is that the Muslims were more civilized and tolerant than their western counterparts, and that they were the preservers of knowledge and science. Stark goes to statistics and shows a very different picture than the pro-Islam stuff my World History textbook tries to push. I use his book in my class to show students there are other views.

Don't lump Trey Parker and Matt Stone in with those cowards. They have already done more than enough.

Off the top of my head I recall the 3 part imaginationland episode and that one where Celebrities demand South Park hand over Muhammad because it will make them safe from mockery.

Bull. Parker and Stone totally punked out. True, it was obviously the higher-ups who ordered them to punk out, but they should have stood their ground.

Gregory Yankey, thanks for pointing out that book. Looks like a serious author. At any rate he has a bunch of positive reviews from significant outlets on the back cover of his book -- and apparently it's a gripping tale the way the author tells it. Guess I'll have to buy it...