Now I'm confused. Muslims keep telling me that if we simply let Sharia take over governments, the world will be a better place for everyone. The Muslim Brotherhood has taken over the Egyptian government, so where are all the teddy bears, birthday cake, and sunshine I was promised? All we get is the same oppression and cruelty that Muhammad and the Qur'an demand. 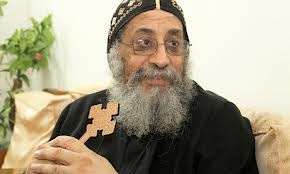 EGYPT — Egypt’s Coptic patriarch delivered a cautious but unusually sharp criticism of the nation’s Islamist leadership in an interview with The Associated Press on Tuesday, dismissing the new constitution as discriminatory and rounds of national dialogues sponsored by the president as meaningless.

Pope Tawadros II’s dive into politics came as he tried to energize the spiritual solidarity of a demoralized community with a visit to a historic monastery that no Coptic pontiff has been to in decades because of security tensions in southern Egypt.

He joined the black-robed monks in a two-hour pre-dawn prayer at the ancient Virgin Mary chapel in the al-Muharraq monastery, said to be on a site where the Virgin Mary took refuge with Jesus and her husband Joseph from Roman persecution.

Tawadros has taken an unusually vocal political activist stance since being enthroned in November as the spiritual leader of the Copts, the main community of Egypt’s Christians.

His papacy comes as Christians are increasingly worried over the rise to power of Islamists in the country and the rule of President Mohammed Morsi, who hails from the Muslim Brotherhood.

In a show of his more assertive stance that Christian complaints must be better addressed, Tawadros appeared less patient with media events that project a false harmony between Egypt’s Muslim and Christian leaders.

His late predecessor, Shenouda III, would often receive Muslim leaders at his cathedral after significant attacks on Christians as a demonstration of unity.

Asked by the AP if he would do the same, Tawadros did not respond directly but said, “Realistically, we want actions not words. We don’t want a show. Egypt has changed, we live in a new Egypt now.” (Continue Reading.)