The "fighting" described here specifically refers to the sort of fighting that involves killing:


Christians and Jews are described in the Qur'an as the "worst of creatures":


Allah has no love for those who reject Islam:

Qur’an 3:32—Say: Obey Allah and the Apostle; but if they turn back, then surely Allah does not love the unbelievers.


Thus, Muslims are explicitly commanded to show mercy only to fellow Muslims:


The penalty for causing problems in a Muslim land is death, dismemberment, or imprisonment:

Qur’an 5:33—The punishment of those who wage war against Allah and His apostle and strive to make mischief in the land is only this, that they should be murdered or crucified or their hands and their feet should be cut off on opposite sides or they should be imprisoned; this shall be as a disgrace for them in this world, and in the hereafter they shall have a grievous chastisement.


So obviously, Islam is a religion of peace and tolerance, and we should all be shocked when Muslims try to kill non-Muslims. 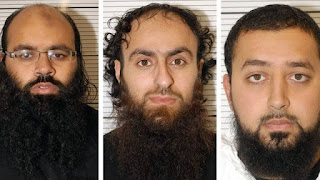 Birmingham (BBC)—Three would-be suicide bombers who plotted to carry out an attack to rival the 7 July and 9/11 atrocities have been found guilty of terrorism charges.

Irfan Naseer, 31, Irfan Khalid, 27, and Ashik Ali, 27, from Birmingham, were found guilty at Woolwich Crown Court of being "central figures" in the plan.

Jurors were told they planned to set off up to eight bombs in rucksacks, using timers to detonate the charges.

The trio were arrested in 2011 amid fears an attack was imminent.

Detectives believe it is the most significant terror plot to be uncovered since the 2006 conspiracy to blow up transatlantic airliners using bombs disguised as soft drinks.

Khalid even boasted that the attack was "another 9/11" and "revenge for everything".

The three men were found guilty of 12 counts of preparing for acts of terrorism between December 2010 and their arrest in September the following year.

The jury heard that Naseer and Khalid had received training from al-Qaeda contacts in Pakistan - and had recorded martyrdom videos there before returning to the UK.

Having recruited others, the group posed as legitimate charity workers on the streets of Birmingham and collected thousands of pounds from unsuspecting members of the public.

Naseer played a key role in sending four other Birmingham men to Pakistan to receive training. All of these have already pleaded guilty to preparing for acts of terrorism: Ishaaq Hussain, 21, Shahid Khan, 21, Naweed Ali, 25, and Khobaib Hussain, 22.

Two other Birmingham men who were part of Naseer and Khalid's plans, Rahin Ahmed, 27, and Mujahid Hussain, 21, have also pleaded guilty to terrorism charges.

The judge told the men they would all face life in prison when they were sentenced in April or May. (Continue Reading.)


The BBC says that the "group posed as legitimate charity workers" and "collected thousands of pounds from unsuspecting members of the public." But according to Islam, one of the legitimate uses of Zakat (alms) is funding Jihad:

Qur’an 9:60—As-Sadaqat (here it means Zakat) are only for the Fuqara' (poor), and Al-Masakin (the poor) and those employed to collect (the funds); and for to attract the hearts of those who have been inclined (towards Islam); and to free the captives; and for those in debt; and for Allah's Cause (i.e. for Mujahidun - those fighting in the holy wars), and for the wayfarer (a traveller who is cut off from everything); a duty imposed by Allah. And Allah is All-Knower, All-Wise.


To understand Jihad, watch this:

Many Muslims knew these guys personally, also knew about their jihadi views yet told no one! Muslim community failed to expose these guys surprise, surprise!!!