The latest campaign to whitewash fourteen centuries of bloody Islamic Jihad features bus ads and banners declaring: "My Jihad Is to Build Friendships Across the Aisle." 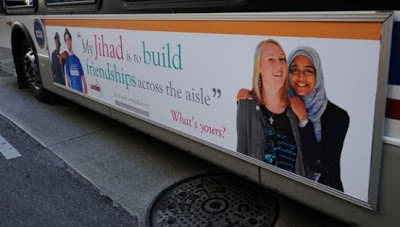 But does Islam really promote friendships with non-Muslims? Not according to the Qur'an, as Robert Spencer and I show in this discussion with Pastor Joseph:


For those who'd like the relevant sources, here you go:


Qur'an 3:28—Let not the believers take disbelievers for their friends in preference to believers. Whoso doeth that hath no connection with Allah unless (it be) that ye but guard yourselves against them, taking (as it were) security. Allah biddeth you beware (only) of Himself. Unto Allah is the journeying.

Ibn Kathir on 3:28—Allah said next, (unless you indeed fear a danger from them) meaning, except those believers who in some areas or times fear for their safety from the disbelievers. In this case, such believers are allowed to show friendship to the disbelievers outwardly, but never inwardly. For instance, Al-Bukhari recorded that Abu Ad-Darda said, "We smile in the face of some people although our hearts curse them." Al-Bukhari said that Al-Hasan said, "The Tuqyah is allowed until the Day of Resurrection."

Ibn Kathir on 5:51—Allah forbids His believing servants from having Jews and Christians as friends, because they are the enemies of Islam and its people, may Allah curse them. Allah then states that they are friends of each other and He gives a warning threat to those who do this, (And if any among you befriends them, then surely he is one of them.) Ibn Abi Hatim recorded that `Umar ordered Abu Musa Al-Ash`ari to send him on one sheet of balance the count of what he took in and what he spent. Abu Musa then had a Christian scribe, and he was able to comply with `Umar's demand. `Umar liked what he saw and exclaimed, "This scribe is proficient. Would you read in the Masjid a letter that came to us from Ash-Sham'' Abu Musa said, `He cannot.'' `Umar said, "Is he not pure'' Abu Musa said, "No, but he is Christian.'' Abu Musa said, "So `Umar admonished me and poked my thigh (with his finger), saying, `Drive him out (from Al-Madinah).' He then recited, (O you who believe! Take not the Jews and the Christians as friends...).

Lovely!!! Let's see how the Muslims wriggle their way out of this.

I saw the second show. It was brilliant. Especially at a certain point both David and Robert really hit their stride, and that was just blazing. And I've always found Pastor Joseph a darned likable, articulate, and warm presence, besides being pretty well-versed in these issues. I still want to see the first show that had Sam in it, and was disappointed he wasn't in the second.

OT:
Recently came across a book that claims that fears of demographic takeover by Muslims in Europe are based on mistaken claims. Here's an excerpt from an interview with the author.

DOUG SAUNDERS: The bottom line is that Muslims in Europe may peak somewhere close to 10 percent of the population - if you include Russia, which has a large Muslim population - by about the middle of the 21st century. And they're really not going to get much larger than that in population. And in fact it may be much lower than that.

And they'll peak at probably somewhere under 2 percent of the U.S. population, around the same size as Jews or Episcopalians. And at that point probably will stop growing because the one thing we have to understand. There's been a revolution in our scholarly and statistical understanding of population growth rates of immigrant groups; is that first of all, the countries they come from, the Muslim-majority countries of the world, are seeing the fastest-falling population growth rates and family sizes in the world right now.

I mean, Iran has gone from seven children per family in the '80s to 1.7 now. It's not exactly a place that - where they go shouting about condoms a lot. And this is true of many of the largest Muslim-majority countries. But also that the immigrants from those countries are having population growth rates and family sizes that are converging quickly within three generations with those of the host countries and so on, which is something that happens with other immigrants, as well.

I think I disagree with many of Saunders' other conclusions -- but if he's right in the above, that would be a tremendous relief, and would change my attitude toward Muslims significantly.

The book, for example in this book excerpt goes into more detail about the above demographic conclusions. Those of us sympathetic to the counterjihad movement need to get a better fix on whether the demographic aspect is as dire as we've often heard.