Seven-Year-Old Yaseen Ali Ege Murdered by Mother for Failing to Learn Qur'an . . . in the U.K.

But the real problem in the U.K., as in America, is Islamophobia. 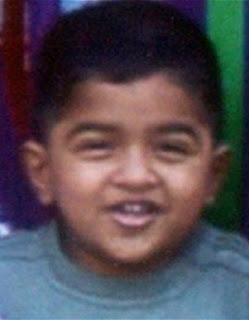 United Kingdom--A mother murdered her young son and set his body on fire when he struggled to learn the Koran off by heart, a court has heard.

Sara Ege used a stick to beat seven-year-old Yaseen “like a dog” if he couldn’t recite passages from the Islamic text.

The beatings were so brutal that the boy died from his injuries, and his mother tried to burn the body to destroy the evidence, Cardiff Crown Court was told.

Yaseen was originally thought to have died in the house fire. But a post-mortem examination showed Mrs Ege had been beating and abusing her little boy in the months leading up to his murder.

In a video recording of her interview with police, Mrs Ege told them: “I was trying to teach him the Koran.

“I was getting more and more frustrated. If he didn’t read it properly I would be very angry — I would hit him.

“We had a high target. I wanted him to learn 35 pages in three months.

“I promised him a new bike if he could do it. But Yaseen wasn’t very good — after a year of practice he had only learnt a chapter.”

The court heard Mrs Ege, 32, a university graduate, and her husband, Yousuf, had enrolled Yaseen in advanced classes at their local mosque.

They wanted him to become a hafiz — an Islamic term for someone who memorises the Koran.

Yaseen was coming to the end of a three-month trial period at the mosque, and Ege was keen for him to impress his Imam.

Mrs Ege told officers: “I was getting all this bad stuff in my head, like I couldn’t concentrate, I was getting angry too much, I would shout at Yaseen all the time.”

She also hit him with a hammer, a rolling pin and a slipper, as well as repeatedly punching him, the court heard. (Continue Reading.)

Hmm, let's think about this one. Set high goal of memorizing recitations of someone who sounds more like a drunken arab than a holy transcendent being so his parents can show him off to his Ummah when they go for their weekly indoctrination of violence at the mosque.

To aid him along in this insane marching orders to be the perfect little tyrant in training it becomes necessary to BEAT HIM EVERYDAY in the HEAD!!!!!

State-mandated sterilization is supposed to be a bad thing. Why am I not seeing it as such anymore? Oh yeah, because it was performed on the wrong people. They meant to sterilize all those in violent ideologies and somehow ended up terminating the reproductive rights of mentally challenged. Silly me.

Meanwhile the lunatics are running the asylum. And breeding. And killing their children by beating them to death or strapping them into suicide vests.

Ladies and gentleman....the religion of piece.

Unbelievable that people who condemn child-abuse and murder like this are called bigots.

Essentially what she's implying is Shaitan (arabic for Satin) caused her to kill him for not learning the Quran.

This murder is in perfect accordance with Quranic teachings. We read in the quran regarding killing innocent children. 18:65 So they found one of Our servants (al-Khadir), on whom We had bestowed Mercy from Ourselves and whom We had taught knowledge from Our own Presence. 18:74 Then they proceeded: until, when they met a young man, he slew him. Moses said: "Hast thou slain an innocent person who had slain none? Truly a foul (unheard of) thing hast thou done!" 18:78 He answered: "This is the parting between me and thee: now will I tell thee the interpretation of (those things) over which thou wast unable to hold patience. 18:80 "As for the youth, his parents were people of Faith, and we feared that he would grieve them by obstinate rebellion and ingratitude (to Allah and man).

So we see that Allah allows to kill innocent children even if they are feared to grow up to be in rebellion. In the verses above, the child had not done anything yet to show signs of rebellion. He was going to be rebellious in future. However, in this murder case we see that the mother found the child to be rebellious in not memorizing the quran. So according to the quran she is just in beating the child to the point of death.

But then again we are told that Islam is a peaceful religion. Hahahaha.

Perhaps she has a jinn.

California releases criminals from their sentences as long as whatever mental illness caused their crimes is "cured". Why not allow the UK Islamic civil courts take on this criminal case as well?

A quick Google search for "how to remove jinn", do whatever it says, then she should be allowed to go free!

Am I the only one who's getting frustrated at seeing cruelty, violence, death, anti-semitism, lies, deceits, immorality, irrationality and more in the name of Islam, the religion of delusion.

A religion that turns its followers into psychopaths, murderers, unhappy and dissatisfied people; A religion that worships death and destruction, disrespect every form of art, violates the freedom of thought, and makes the individuality, creativity and love a severe SIN; A religion that promotes public barbaric punishments, hatred and fear of your peers; A religion in which the few followers who do not condone such crimes are not willing to say it out loud and try to stop the radicals, thereby consenting to their horrible actions and disrespect towards the basic rights of every human being, that religion should be firmly banned and forbidden in every civilized society.