Normally I would say something sarcastic about "Islamophobia" being the real problem, but after posting Sherifi's picture, I can't help but think, "What a DORK!" 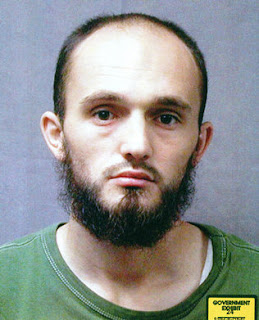 RALEIGH, N.C. (AP) — A North Carolina man serving a 45-year sentence for a terror plot to attack a U.S. Marine base and overseas targets was found guilty Thursday in a murder-for-hire plot to behead witnesses who testified against him.

Hysen Sherifi, 28, of Raleigh was found guilty Thursday of nine counts related to the murder-for-hire plot, U.S. Attorney Thomas Walker said. Sherifi will be sentenced in February, when he faces a maximum sentence of life behind bars.

"This conviction is further evidence of our resolve to pursue those who seek to attack our freedoms and destroy the way of life we all cherish," Walker said in a news release.

Sherifi represented himself at the trial, which began Monday in U.S. District Court in Raleigh. After opening statements by prosecutors, Sherifi read religious verses in Arabic and lectured jurors on their meaning in English.

"We fight for Allah. We have authority. Do you have authority to make laws for mankind?" Sherifi told jurors. "We do not make laws. We follow the laws that have been revealed by Allah."

He continued the same theme in closing arguments Wednesday, when Judge Earl Britt stopped Sherifi from saying "that all judgment belongs only to Allah" and told him to argue his guilt or innocence. Britt eventually had U.S. marshals handcuff Sherifi and take him from the courtroom to a jail cell. (Continue Reading.)


For more on terrorism, visit our "Jihad" page.
Posted by David Wood at 1:31 PM

He looks like a person who was desperate for friends. To bad he picked the wrong ones.

Retard. where was allah hiding?