Why send Khalid Ali-M Aldawsari to prison? Wouldn't it be easier to open a Qur'an, show him all the peaceful teachings, and then let him spend the rest of his life serving his fellow man? (Click here to see what the Qur'an really teaches.) 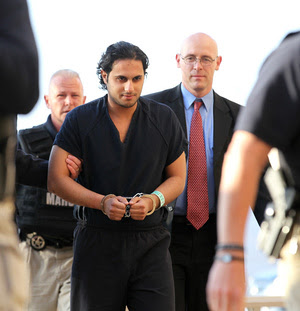 AMARILLO, Texas – A former Texas college student from Saudi Arabia was sentenced to life in prison Tuesday for trying to make a bomb for use in a religious attack, possibly targeting a former U.S. president.

Khalid Ali-M Aldawsari was sentenced in Amarillo, where jurors convicted him in June of attempting to use a weapon of mass destruction. Prosecutors say he had collected bomb-making material in his apartment and researched possible targets, including the Dallas home of former President George W. Bush. A handwritten journal found in his apartment included notes that he believed it was time for "jihad," a Muslim term for holy war.

Although the 22-year-old Aldawsari apologized Tuesday for "these bad actions," Judge Donald E. Walter said the evidence against him was overwhelming. Walter acknowledged he was conflicted due to Aldawsari's youth and signs that outside influences had led him astray.

"But the bottom line is that but by the grace of God there would be dead Americans," Walter said. "You would have done it. In every step, it was you all alone."

Aldawsari stood silently in shackles as the sentence was read. The formerly clean-shaven, close-cropped man now had a full beard and long hair, and appeared to have lost a lot of weight.

There is no parole in the federal system for defendants convicted of recent crimes.

Aldawsari came to the U.S. legally in 2008 to study chemical engineering. He was arrested in Lubbock in February 2011, after federal agents secretly searched his apartment and found explosive chemicals, wiring, a hazmat suit and clocks, along with videos showing how to make the chemical explosive TNP.

Investigators say Aldawsari's goal was to carry out jihad. His attorneys claimed he was a harmless failure who never came close to attacking anyone.

FBI bomb experts have said the amounts of chemicals in the case would have yielded almost 15 pounds of explosive — about the same amount used per bomb in the 2005 London subway attacks. He also tried to order phenol, a chemical that can be used to make explosives.

Court records show that his emails and journal contained the explosive's recipe. Prosecutors said other targets he researched included nuclear power plants and the homes of three former soldiers who were stationed at Abu Ghraib prison. (Continue Reading.)

He is so proud of himself. Enjoy prison. Lets hope the inmates enjoy him!

He eats the bread of bitterness, chooses to kill. The Lord God has said it so many times-- he who digs a pit to trap another inevitably falls into it himself.
God's truth is clear even in a wicked man's life.

People all over the free world need to wake up as regards providing education to people who may want to destroy us. A Saudi studying chemical engineering in the US? Come on!

Go to this Whitehouse.gov link to sign a petition to permanently ban Sharia law in the U.S. Act now before it's too late.