It's official. Kassim Alhimidi, husband of supposed hate-crime victim Shaima Alawadi, has been arrested for murdering her. Shaima's death spawned international vigils and rallies condemning critics of Islam. Many non-Muslim women and girls donned hijabs in a show of solidarity. Yet Alawadi wasn't a victim of an anti-Muslim hate crime at all. She was the victim of an honor killing. And her husband used the media's paranoia over an imaginary mental disease called "Islamophobia" to cover up his crime. Will the media learn their lesson and not be so desperate to condemn critics of Islam that they end up helping criminals again? Don't hold your breath.

EL CAJON — The eight-month investigation into the beating death of an Iraqi woman in her El Cajon dining room has led to the arrest of her husband, police announced Friday, putting to rest any notion that the mother of five was the victim of a hate crime.

The eight-month investigation into the beating death of an Iraqi woman in her El Cajon dining room has led to the arrest of her husband, police announced Friday, putting to rest any notion that the mother of five was the victim of a hate crime.

Kassim Alhimidi, 48, was arrested at the El Cajon police station Thursday evening and booked into jail on one count of murder in the slaying of Shaima Alawadi.

He is being held without bail and is scheduled to be arraigned Tuesday.

Alawadi, 32, was apparently planning to divorce her husband and move with her children to Texas, her brother, Hass Alawadi, told U-T San Diego. He said the husband had known about her plans to divorce for quite some time.

“After months of hard work, ... we determined this homicide was the result of domestic violence and not a hate crime,” El Cajon Police Chief Jim Redman said at a news conference Friday.

Investigators did not discuss possible motive or evidence in the case. No other arrests have been made, Redman said.

Alawadi was attacked at the family’s Skyview Street home March 21, when her husband had reportedly left to take their four younger children to school. She was struck on the head at least six times and suffered four skull fractures, according to court records. She was taken off of life support three days later.

A threatening note that called the family terrorists and told them to go back where they came from was found near her body. The handwritten note turned out to be a copy, not an original, according to court records. The family said a similar note had been left on their door weeks earlier, but they did not report the incident to police or keep the note. 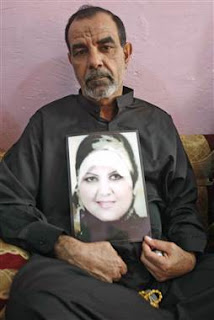 The early implications that the slaying was a possible hate crime spawned international attention, especially among the Muslim community. Peace rallies and candlelight vigils promoting unity and a Muslim woman’s right to wear a head scarf spread throughout the world.

Alhimidi and his children gave tearful interviews to the media in the days following the slaying, and the widower was seen crying over his wife’s casket during her funeral in Iraq, at one point fainting.

In an interview a week after the killing, her husband told the Arabic Al Arabiya News: “My wife was a victim of xenophobia.” (Continue Reading.)


For more on honor killings in Islam, be sure to watch our ABN special.
Posted by David Wood at 12:02 AM

Since this was called an "honor killing" based on the husbands religious beliefs, why then is the husband NOT charged with special circumstances since attacking someone because of "religious belief" would constitute a "hate crime".

KAssim should be stoned to death and the husk fed to the dogs.

I"m shocked by this news, completely shocked. I thought for sure the daughter had something to do with it.

I am not in the least surprised, but I reckon CAIR has some explaining to do. Can't wait!