The judge of the appeals case was concerned that an Al Qaeda operative convicted of terror plots might not be treated fairly if he is deported to Jordan. Hence, he had to be released. No worries! 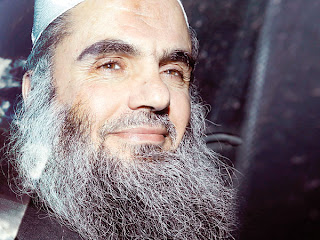 LONDON – A radical Islamist cleric described by prosecutors as a key Al Qaeda operative in Europe was freed from prison Tuesday after a court ruled he cannot be deported from Britain to Jordan to face terrorism charges.

The preacher was seen smiling as he was driven away from Long Lartin maximum security jail in Worcestershire, central England, in a black MPV.

Britain's government has attempted since 2001 to expel Abu Qatada, a Palestinian-born Jordanian cleric convicted in Jordan over terror plots in 1999 and 2000, but has been repeatedly thwarted by European and British courts.

Abu Qatada won bail at a hearing Monday, when the Special Immigration Appeals Commission, which handles major terrorism and deportation cases, upheld his challenge to the decision to send him to Jordan.

Judge John Mitting said he was not convinced the cleric would receive a fair trial, despite the government's insistence that it has won assurances from Jordan over how Abu Qatada's case would be handled -- including from Jordan's King Abdullah II.

Mitting said there remained a real risk that evidence obtained through torture would be used against Abu Qatada, which would be a breach of his human rights. (Continue Reading.)

Ahhh... so, since there is a possibility of torture, he will not be extradited to Jordan. How can theoretical future events that have not occurred (and may not occur) dictate judicial ruling? The genius of bureaucracy...

If, the West ever falls, it won't be at the hands of Moslems but it would be by its own people.

That shows it all that so-called British as a terrorist state only protects its kind! Any more need for further evidence needed?

Somethings wrong with the british pc. They free the muslim terrorists and jail the patriots. they have become dhimmis