Hmmm. If this girl had been shot by an Israeli soldier, there would be international riots right now. But since she was shot by a Muslim, we won't hear a peep from Muslims. I'm sensing some double standards. 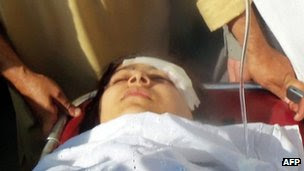 (AGI) Peshawar, Oct 9 - A 14 year old Pakistani girl who fought to restore peace in Swat, has been shot. Malala Yusyufzai, who also campaigned in defence of the right to education of her fellow girls, rose to world prominence in 2009 when she blogged for the BBC Urdu service about atrocities committed by the Taliban. The girl was hit by two shots, one to the forehead as she was climbing into a car to go to school. Two other girls were also injured. Malala was transferred to hospital in Peshawar where she is reported to be in a stable condition. The recipient of the Pakistani government's first National Peace Prize in December 2011, the young girl the Taliban had put her at the top of their hit list. (Source)

Does this tragedy reflect an intrinsic flaw in the collective consciousness of Islam? Is it fear? what is the mechansim by which thousands upon thousands of Muslims murder and scream and rage against a stupid little tacky film yet do not cry out in honorable anger against the Taliban for attempting to murder a 14 year old girl? Where is the international outcry ? Where is the Muslim community to support this young lady of great strength of soul.?

Such brave Taliban. Shooting a young girl. Would that they were executed for this. But the Afghan government won't do much about it. Hope she will recover.

here is a youn g lady with such strength of soul, such character and honor.There should be an international Muslim outcry in support of this girl .a concerted educated condemnation of this disgraceful cowardly attempt at her murder.Where is the outcry? This attempt at her murder and the silence reflect a deep deep issue on the role of women in Islam, courage, fear and integrity.that seems to be . very tragic and disturbing

In our culture, even in the jails with hardened criminals, a man who killed a young girl would be considered scum. He would have to be kept in solitary or the other inmates would kill him.

I its very sad to here news like this i feel very sorry for this girl i am from Pakistan and really i hate Talaban and I hate The Sharia Laws.

Islam - the fear that someone somewhere is enjoying their freedom or wants freedom.

I got it ... they are terrorizing others ... and she was an example

Where is the media?

The fear of ALLAH is the beginning of rapes, murders, bombings, atrocities etc.

The bible says love your wife.

The Koran says beat your wife.

Just following the example of their prophet who asked for the death of a woman satirizing him! Islam is vile.

Unfortunate for the girl she was following the wrong religion, in a wrong country, trying to help wrong people, using wrong methodology... her hoping for change in such a situation is itself wrong... I see no hope for islamic community anywhere.. the only way they will have hope is leaving islam altogether.. otherwise, one way or another, it is going to lead to genocide.. just do not know which side will lose..

Many Muslims today are not happy!


So, where are they happy?


So, they're happy in every country that is not Muslim.

And who do they blame?

Not Islam.
Not their leadership.
Not themselves.

THEY BLAME THE COUNTRIES THEY ARE HAPPY IN, AND THEY WANT TO CHANGE
THEM TO BE LIKE THE COUNTRY THEY CAME FROM WHERE THEY WERE UNHAPPY.

Excuse me, but have I missed something here?

I should have made it "Pakistani government" not "Afghan government" in my earlier post . But there's not a huge difference. They are both pro-Taliban when you get down to the nitty gritty.

The taliban is merely following the sunnah of their "prophet". This is the same "prophet" who said that a mat in the house is BETTER than a barren woman.

Abu dawud 38:4349 Narrated Ali ibn AbuTalib: A Jewess used to abuse the Prophet (peace_be_upon_him) and disparage him. A man strangled her till she died. The Apostle of Allah (peace_be_upon_him) declared that no recompense was payable for her blood.

The cruelty of islam is nothing new, its all halaal to kill for in the name of allah

The fear of ALLAH is the beginning of stupidity.

This is a Must see, its a pro blasphemy law protest in Canada. Pay close attention at 6:05 a little boy is holding a sign that reads "Islam CONDONES Racism" when asked "I thought racism was a bad thing" the little boy responds "I don't think so" lol

First of all, Christians should wipe the smug smile of their face when preaching the Gospel.

I see people like David & others light heartedly debating with Muslims as it it was some kind of College Debate, when in fact it has eternal consequences.

People like David, need to go away & reflect on the Gospel & ask if he is spiritually prepared to do the work of an evangelist?

The SHOWMAN is of the world! This is a SPIRITUAL BATTLE!

I predict that gunman won't live long. I hope not.

Someone else made a good point. The Qur'an denies that human beings are made in the image of God.

That denial, ramified into all the doctrines of Islam, is the reason why so many Muslims treat human life as something so cheap. That's part of why they don't recognize a boundary between civilians and soldiers. That's why they can intentionally murder a 14-year old girl. We saw similar not long ago in France, when an Islamic gunman grabbed an even younger girl by the hair and shot her in the head.

Pip said, "First of all, Christians should wipe the smug smile of their face when preaching the Gospel.

I see people like David & others light heartedly debating with Muslims as it it was some kind of College Debate, when in fact it has eternal consequences.

People like David, need to go away & reflect on the Gospel & ask if he is spiritually prepared to do the work of an evangelist?

The SHOWMAN is of the world! This is a SPIRITUAL BATTLE!"

1. David is engaging with Muslims. He's actually ENGAGING WITH PEOPLE WHO ACTIVELY REJECT THE GOSPEL. From where I sit, there's not enough 'smug-mugged' christians doing it. Me included but if there was ever a discouragement not to do it,sir...bravo.
Evangelists do engage with people when preaching the gospel. Engaging is different from preaching at. People tune out preaching at. They can't turn off from a fellow human being in one on one dialogue.

Also...I don't think Christ described the facial expressions you needed to have when preaching the gospel. I'll have to go back and look.

2. Us 'Christians' should wipe the smug looks off our faces???!?! I thought you were mad at David but we all have smug looks?

3rd. You need to check your attitude. Having a 'holier than thou' (yes, pun intended and served with an order of sarcasm and a hot apple pie) disposition with your fellow brothers in christ( if they're not too beneath your notice), is violating the bible's command that you endure with your fellow brother's failings. You're to rebuke sharping if and when incorrect doctrine is preached, not just because you don't like their gospel delivery presentation.
An attitude like this, sir, makes you sound kind of....smug.

3 and one quarter....maybe you should go back and read the bible and see if your ready for the spiritual work of being an evangelist.

Thanks for bringing absolutely nothing to the table. No sir, we christians dont have a smug on our faces, it may appear like that because we are task by our religion to practice forgiveness for people like you and those muslims who kill us. No sir, what looks like a smug on our faces is us praying for those who tresspas against us.

And dont worry, I will still pray for you.

In Christ, for Christ, by Christ

You are 100% correct Muslim are happy in christain countries and they are not happy in there home land I am Muslim i am living in Christain Country.