Nothing says "Islam" like attacking people who have nothing to do with what you're angry about. 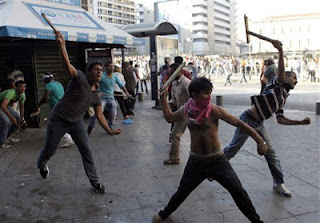 ATHENS, Greece – Greek riot police used tear gas and pepper spray to disperse Muslim protesters who clashed with officers Sunday during a rally against a film produced in the U.S. that denigrates Islam's Prophet Muhammad. No injuries were reported.

A general strike in Bangladesh shut down schools, transportation and businesses, while a few hundred people peacefully marched in Pakistan. Iranian students burned flags in Tehran to protest the recent publication of lewd caricatures of the Muhammad by a French satirical weekly.

In Athens, six people were detained during the demonstration at a central square, police said. About 600 people attended the rally, which featured heated speeches, but was mostly peaceful.

Some in the crowd then wanted to march to the U.S. Embassy, which is about three kilometers (two miles) away from Omonia Square. They tried to break through police lines several times, but riot officers pushed them back.

The violence occurred at the end of the rally, when small groups of protesters threw objects at police. Three cars were damaged and three storefronts smashed.

Banners were displayed in English, denouncing the film and called on the U.S. to hang the filmmaker. One told President Barack Obama "we are all with Osama," referring to Osama bin Laden, the al-Qaida leader who was killed in a U.S. raid in Pakistan in May 2011.

The amateurish film, which portrays the prophet as a fraud, a womanizer and a child molester, has sparked violent protests throughout the Muslim world for nearly two weeks. They have resulted in the deaths of at least 49 people, including the U.S. ambassador to Libya. (Continue Reading.)

Khadija is a women!
women are Lacking of brain and religion!

I would be upset too ... that is nonsense

It's time to put the animals back in their cages.

Dear Dr. David MAY THE BLESSING OF OUR PRECIOUS LORD BE WITH YOU ALWAYS. The job you guys are doing cannot be appreciated by us. Thank you very much for putting your life on the line for us to know the truth. and the same go to your strong wife and children please.

All I can say about the film is that it contents some truths maybe not well worded I cannot judge, but the mainstream media cannot or doesn't want to even look into it. From the way muslims are reacting all over the world it really shows that they are innocent and I will act ignorant as well.
Thank you Dr. David. MAY GOD BLESS YOU ALL.