The French satirical magazine Charlie Hebdo is similar to the show South Park, in that the writers love to poke at people's most cherished beliefs (often in the most offensive way they can think of). But the Hebdo writers are different from their American counterparts in one crucial respect: they refuse to back down from threats and intimidation. The result? Charlie Hebdo has published cartoons of a naked Muhammad. (You can view the cartoons here.)

And yet we'll all keep reciting the same politically correct mantra: "Islam is no different from any other religion." 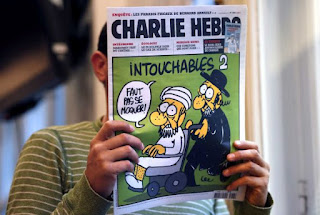 PARIS — A French magazine ridiculed the Prophet Mohammad on Wednesday by portraying him naked in cartoons, threatening to fuel the anger of Muslims around the world who are already incensed by a film depicting him as a womanizing buffoon.

The French government, which had urged the magazine not to print the images, said it was temporarily shutting down premises including embassies and schools in 20 countries on Friday, when protests sometimes break out after Muslim prayers.

Riot police were deployed to protect the Paris offices of satirical weekly Charlie Hebdo after it hit the news stands with a cover showing an Orthodox Jew pushing the turbaned figure of Mohammad in a wheelchair. On the inside pages, several caricatures of the Prophet showed him naked.

Reacting to the publication, Essam Erian, acting head of the Egyptian Muslim Brotherhood’s Freedom and Justice Party, told Reuters: “We reject and condemn the French cartoons that dishonor the Prophet and we condemn any action that defames the sacred according to people’s beliefs.”

Calling for a UN treaty against insulting religion, he added: “We condemn violence and say that peaceful protests are a right for everyone. I hope there will be a popular western and French reaction condemning this.” (Continue Reading.)

Ready for an additional weak of turmoil!

Non-westernized muslims have NO tolerance, yet they're supposed to be practicing it.

What do you mean they are suppose to practice it. There is NOTHING in Islamic doctrine that teaches tolerance of non Muslims or people who are critical of Islam and Mohamed (i.e.) tell the truth about them. !

Perhaps what akairey means is that that's what they keep telling us--that they are tolerant. Sort of like their other memorized (or indoctrinated?) statements about certain issues, like they love ALL the prophets and that Muhammad is no different from any of them, and that they love Jesus, and that Islam is peace, etc.

Just to share something funny about one of those pictures: the one where Muhammad character holds a pic head.

Here is the french words and I will translate it in english:

hahahahaha this is hilarious!

The actor: "Are you sure that Mohammed had sex with a pig head?"

Cameraman: "I can not afford to pay a nine years old whore, dude"