Judge Brennan must be either a racist, Islamophobic bigot, or someone who recognizes the obvious. I'm going with the latter. 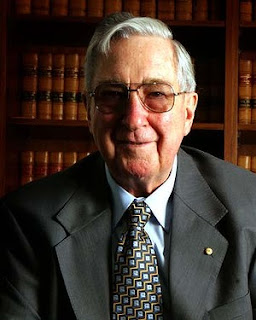 "No court could apply and no government could administer two parallel systems of law, especially if they reflect - as they inevitably would reflect - different fundamental standards," he said.

To do so would result in two legal systems and confirm dual cultures, Sir Gerard said during a lecture in honour of the former law professor Hal Wootten at the University of NSW.

"The democratic principle prescribes that the culture of the majority is determinative of the legal structure," he said. In Islamic law, he said - quoting the president of the Abu Dhabi Supreme Court - customs and legal reasoning had to agree with the Koran. But in Australian common law there was a gap between the requirement of the law and individual moral standards.

"We call that gap 'freedom' and it allows Australian law to protect the cultural moral values of our minorities," he said. (Continue Reading.)

Question for any Muslim citizen in a western nation, especially if you consider yourself moderate and that Islam means peace. Do you love the nation you are in? Do you love its system of law?

Again I am not asking if you tolerate it, or if you are under a contract to obey it, I am asking if you love it, do you love living under it more then you would a pure Islamic state????

Would you consider your self patriotic to you western home? Are you one nation along with the kuffar?

"The democratic principle prescribes that the culture of the majority is determinative of the legal structure," he said. In Islamic law, he said - quoting the president of the Abu Dhabi Supreme Court - customs and legal reasoning had to agree with the Koran. But in Australian common law there was a gap between the requirement of the law and individual moral standards".

Meaning that until Muslims have a majority rule in Parliment they put up and shut up or go to their paradise in the middle east. Because we DON"T want Sharia, We don't want anything to do with the Satanic Koran.

How many generations are we away from having a majority rule of muslims in the west? It's obviously a question alot of people have on their mind.

You can always trust the Aussies to stand up and put up a fight! It's a shame that Britain isn't doing the same- We all have to be prepared to fight back.

What I dont understand... these muslims 'migrate' from their oppressive economically deficient islamic countries, and then they want to recreate the same situation in a propersous western nation.
Why? Is it because they are jeaolous that christian based nations are triving or maybe they are sadistic, they want all people of the world to suffer that same poverty stricken fate of their homeland...as they cant get out of it!