The West is still suffering from a terrible delusion. Our leaders really seem to think that if they help Islamists rise to power, the Islamists will be terribly grateful, and will treat us as friends and allies. This delusion caused our leaders to help Muslim rebels overthrow Libyan dictator Muammar Gaddafi. Now that Islamists are in power, they are desecrating British graves and smashing crosses, while shouting "Allahu Akbar." Perhaps our leaders will eventually learn that Islamists have no concept of gratitude.

Now former Libyan rebels in Benghazi – liberated with the aid of the RAF last March – have systematically desecrated the graves of more than 150 British servicemen killed in North Africa 70 years ago. 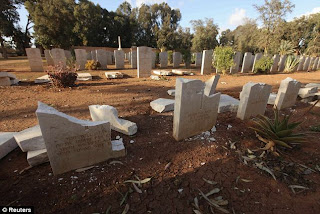 Headstones at the Benghazi War Cemetery have been torn down and crucifixes smashed with hammers by a mob of extremists, some carrying guns and dressed in combat fatigues.

More than 1,000 soldiers and airmen who lost their lives in the desert wars of Montgomery and Rommel are buried at the site in Eastern Libya.

Many were members of the famed 7th Armoured Division, known as the Desert Rats, who played a crucial role in the see-saw battle for control of Libya and Egypt between 1941 and 1943.

Graves of RAF pilots were among those shattered by the thugs. It was their job to fly bombing raids – just as the RAF did last year – to assist Lieutenant General Montgomery’s Eighth Army and support commandos clearing routes for tanks.

Sickeningly, the attack, which was carried out over two days last week and appeared highly organised, was filmed by one of the men involved and posted on the internet. 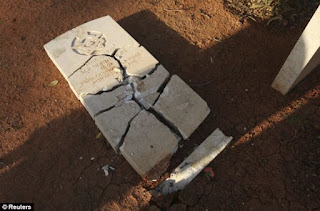 As they rampage among the graves, members of the mob are heard to repeatedly say of the dead servicemen: ‘They are dogs, they are dogs.’

The violence was thought to be retaliation, in part, for the burning of the Koran by US soldiers in Afghanistan last month.

Footage shows the mob methodically kicking down grave after grave. Some are then smashed with hammers. ‘Destroy that cross, they are dogs,’ cries one hooded rebel.

Another voice is heard saying: ‘We begin with this one then we’ll take care of that other one. We won’t leave any left.’

A few seconds later another extremist says: ‘This tomb has a cross on it – a disbeliever.’

As they discover a Jewish grave bearing the Star of David, one of the men says: ‘Look at what it says on it. There is even Israeli writing . . . in Hebrew.’

And in one of the most disturbing sequences, one protester attaches a ladder to the Cross of Remembrance next to the cemetery. He climbs up it and begins hacking at the memorial with a hammer. Then he shouts: ‘Watch out young people. It’s going to fall.’ The cross is then smashed off. (Read more.)

So sad. I can't even get mad. This is just sad.

The brilliance of Islam.

Is this the Muslim version of evangelism?

And this is why I am against any MILITARY intervention to stop Muslims from killing Muslims.

Again I say it again and again.

Isolation, and CONTAIMENT. That is the best we can hope for.

We need to adopt the Chineese and Russian modle of forgign policy.

This is a sick joke! I investigated the source and found the following facts:

1- The gunmen imposed themselves upon the cemetary. They were unknown and remain unknown to this day.

2- The cemetary keeper told the gun men that they should show respect to the dead. The gunmen said that they don't care.

3- One of the claims that I heard in Arabic was that this was a response to the burning the Holy Quran in Afghanistan incident.

4- The gunmen were not officials from the Libyan government. Either they were over overzealous Muslims who went way overboard with this action, or they are remnants of the Ghadhafi regim.

I seem to think that they are remnants from the Gadhafi dogs. THINK ABOUT IT: THE CEMETARY HAD ALWAYS EXISTED IN BENGHAZI! Why now? Why after the NATO's help to Libya?? I smell a conspiracy in this.

Lucky fka Osama has put his lucky charms into it.

You smell a conspiracy?

Osama I promise to stop but first you have to prove to me that you're not a leprechaun.

This is nothing new. Muslimes have been desecrating churches and synagogues for centuries.

I had a Christian friend from Lebanon whose Christian village was taken over by islamonazis, the church was razed to the ground and the Christian cemetery in which his grandparents were buried desecrated and the Christians forced out, all by muslonazis, in the 20th century.

You forgot to address the part where none of what you pointed out matters.

They are truly heartless, they have no respect for anything not even the dead, and yet they expect us to care about the quran the root of all evil.

What if we should now behave like them and grab a few random muslims on the road and kill them, go and smash muslims graves in ,God forbid it will start world war three.

this religion is evil and Muslims should run away from it I don't care if you are a nice person Islam is evil.

Osama said "I smell a conspiracy in this." You muslims smell conspiracy everywhere when you need to hide you quran supported acts of violence against non-muslims. It's funny you smell conspiracy here but can't realize the big conspiracy Islam rpresent against God's word, leading astray so many people in the world to make them think that they can earn heaven throught their own works and that their sins will be erased just like that going against what God teaches since the old testament...

Exuse my Frence but

@ Osama just exactly drugs are you taking to make you so delusional. Can you image a group of Christians descrating Muslims graves posting on the net you guys would go absolutely billistic.

My Father was a veteran in France with the Canadian army he gave nearly 6 years of his life so that guys like you could run around and shout Allahu Akbar without being sent off to a concentration camp or shot and all you can do is make lame excuses. Have you no shame?

This is a dispicable and contemptable act and because you will not condem it but makes excuses you show your true colours.

I smell a conspisary, its comming, muslims will jump up and down about "it wasn't muslims who did this", "mossad sent some joos to do it to make islam look bad", "its just a tiny minority who did this", "they don't represent islam", "this has got nothing to do with islam", "its all Israels fault because of palestine", I think I covered most of the usual excuses muslims make to cover for their co-religionists, if I have missed any, please feel free to add them. Muslim requires some supposed "slight" against islam to warrant muslims doing what they do best, distroying anything and everything they can get their hands on. Even if the whole world was one brand of Islam, the fighting, killing, bombing would never stop, rather it would implode for lack of some "infidel" to blame for their lack of everything.

"Osama I promise to stop but first you have to prove to me that you're not a leprechaun."

How did you figure out that I was a Leprecon?? Who told you????

Because you just told me.

Are there going to be any lucky charms in your heaven?

Dear Brethren
I'd like to great you in hte HOLY PRECIOUS NAME OF OUR PERFECT LORD JESUS.

I was waiting to read this from pr. Osama Buffoon Abduallah. Another classic defense from the pro. himself. pro. Osama Buffoon just tell us that it was a group of Jews since "Libyas" call their former president dog or Jew, not a surprise to me that you are moving towards that direction pro. Osama Buffoon.
pro. Osama Buffoon let me tell you this please "Lies travel by lift but Truth travel through the stairs to the last level of the building" And I do not need to tell you that stairs are the safest way to use in any building. Islam is a bunch of lies.
To finish with today pro Osama Buffoon I must ask you the usual question: In which whale is the sun setting today? I mean the number. Thank you for your response in advance pro. Osama Buffoon Abdu-allah

Dear Dr. David thank you for your kind and sincere effort in helping us know the truth and only the truth

Osama's a leperchaun? I had thought him a troglodyte.

Where in the video did you hear that

"that this was a response to the burning the Holy Quran in Afghanistan incident." !

Are you saying that there are remnants of the Ghadhafi regim caring weapons now walking in Libya!

You forgot to translate when they called us "dogs"

One of them said "Break the cross of the dogs"

What do you think they are saying while breaking crosses?

More of that Muslim tolerance I see.

Hey Osama! WHy didn't the muslime police force do anything to stop the desecration of the cemetery? After all, this was being done in broad daylight. Were they too busy beating up their wives, Christians or the few Jews still left in Libya?

a very very shame act, clearly they never heard the story .. if those soldier knew this treatment they would get maybe at that time allied army let the libya control under nazi german, who knows they get more behave ....

clearly by doing this prove to me that muslim army only brave enough to face the weak and the dead ... pls try that face to face with the real army on the battle ground like the real soldier... i bet they would run away like iraqi, or get wipe out instantly ....