We've been hearing the myth for decades. "The problem isn't Islam; the problem is that people in the Middle East don't have democracy. Muslims only react violently because they have no means of making their voices heard." This gives us the false hope that if we help get rid of dictators and bring democracy to the Muslim world, peace and tolerance will follow.

You'd think that reality would finally be setting in, but the world is still in denial. Meanwhile, oppression is soaring in Iraq, Egypt, Libya, Pakistan, and Afghanistan. If a population believes in violence and oppression, altering the political system changes nothing. 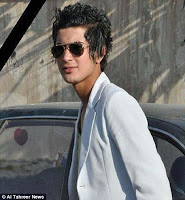 DAILY MAIL--More than 90 Iraqi students have been stoned to death for their Emo haircuts by religious extremists in Baghdad in the past month after an interior ministry statement dubbed it devil worshipping.

Iraq's Moral Police released a statement on the interior ministry's website condemning the 'emo phenomenon' among Iraqi youth, declaring its intent to 'eliminate' the trend.

'The Emo phenomenon or devil worshipping is being followed by the Moral Police who have the approval to eliminate [the phenomenon] as soon as possible since it's detrimentally affecting the society and becoming a danger,' the statement read.

'They wear strange, tight clothes that have pictures on them such as skulls and use stationary that are shaped as skulls. They also wear rings on their noses and tongues, and do other strange activities,'. 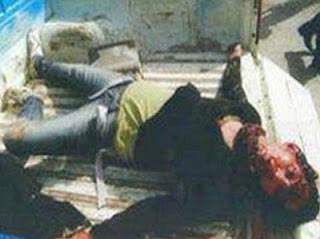 Since the statement was published religious extremists have been harassing and killing teenagers with 'strange' or 'emo' appearances.

A group of armed men dressed in civilian clothing led dozens of teenagers to secluded areas a few days ago, stoned them to death, and then disposed their bodies in garbage dumpsters across the capital, according to activists, activists told the Cairo-based al-Akhbar website.

The armed men are said to belong to 'one of the most extremist religious groups' in Iraq.

'First they throw concrete blocks at the boy's arms, then at his legs, then the final blow is to his head, and if he is not dead then, they start all over again,' one person who managed to escape told Al-Akhbar.

Iraq's moral police was granted approval by the Ministry of Education to enter Baghdad schools and pinpoint students with such appearances, according to the interior ministry's statement.

The exact death toll remains unclear, but Hana al-Bayaty of Brussels Tribunal, an NGO dealing with Iraqi issues, said the current figure ranges 'between 90 and 100.'

'What's most disturbing about this is that they're so young,' she said.

Al-Bayaty said the killings appear to have been carried out by extremist Shia militias in mostly poor Shia neighborhoods and said she suspected 'there's complicity of the Ministry of Interior in the killings.' (Read more.)

Ever notice that Islam's solution to everything is to KILL or mame and mutilate.

I'm sure Allah is pleased.

Let me guess this was all done by Zionist JOOSH to make Islam look bad.

Or it was done in retaliation for US soldiers burning the Quran.

You have got to be kidding me. They killed them over that. WOW.

"Since the statement was published religious extremists have been harassing and killing teenagers with 'strange' or 'emo' appearances"
It seems like muslims just wait around with there stones and guns waiting for an excuse to kill people, if its not westerners they turn on there own young people or women.
these people really enjoy killing other human beings.
I can't believe these kids were killed for looking strange, coming from people who make their women walk around looking like ninjas with only their eyes showing.

"You have got to be kidding me. They killed them over that. WOW.'

You are kidding right?

Hmmm it seems that their only answer is murder.

You doubt mohammed = you will die

"Insult" a dead man = you will die

Leave islam = you will die

Don't wear a headscarf = you will die

Lovely ideology. Not allowed to think for themselves are they !

Though I don't agree that you should be stoned to death for tight clothing and various haircuts, when in the middle east, foreigners & nationals need to be sensitive to their culture. If the culture says, tight clothing is not accepted, simply don't wear tight clothing. That is what I learned when on the mission field in Indonesia and the Philippines.

Hope the problem gets resolved.

All for Christ,
Ronnie

These 90 to 100 dead are Iraqis, NOT Westerners, who don't know the culture! DUH! They, of all people, should know what Islam says is to happen to ANY who do not "tow the line". I feel sickened that American soldiers have died to "free" these people, and we find they're no more free today than they were under Saddam Hussein. The "problem" in the Middle East is not a lack of "democracy" but the lack of knowing Jesus, the Son of God! NOTHING will change until the shackles of ISLAM are removed, and the captives are set free.

Terrible story, sad Muslims would be so low .... I work with emo kids who self mutilate, I'm well aware of the culture ... Great emphasis in this article, loved it..... But the guy with the nice haircut and sun glasses is far from emo ... Emo kids normally wear dark, almost gothic clothing, color their hair black or multiple colors, from pink to purple to blue .... Skulls and chains and multiple piercings are normal for emo kids. Emo kids are known for self mutilation and depression and certain styles of rock music (rock music is a product of the culture), those who do not self mutilate are instead known as "Scene kids" who love the culture but do not self mutilate. Sad story.

"A group of armed men dressed in civilian clothing led dozens of teenagers to secluded areas a few days ago, stoned them to death, and then disposed their bodies in garbage dumpsters across the capital, according to activists, activists told the Cairo-based al-Akhbar website"

I myself would get shot to death by certain "Muslims" for the beliefs that I have and for the certain groups that I oppose. I wouldn't trust being near Shias. I know they'd put me to death in a heart beat. It's these same people who killed people because their name was 'Omar' on their Id cards.

"nationals need to be sensitive to their culture"

If they are nationals perhaps they would like their "culture" to leave the stone ages and join the real world. Murder is murder. Why the hell should people be force to wear pajamas and grow massive beards because of the paranoia of their insane mullahs!

I see what you're saying, but these are kids. Young people tend to be rebellious. It's in their nature to push their boundaries. Whether or not they were aware of the Islamic culture (which varies depending on the Muslim you ask) doesn't matter. On top of that, kids like to express themselves. They want to be different in their own way.

It's very upsetting--more than words can say--what's been done to them. Despise Islam for what it does to its followers but don't lose your humanity in the process. These kids are the victims here, not the culprits.

Osama asks the question: "But why are you blaming Islam for this?"

"The armed men are said to belong to 'one of the most extremist religious groups' in Iraq."

"I myself would get shot to death by certain "Muslims" for the beliefs that I have and for the certain groups that I oppose. I wouldn't trust being near Shias. I know they'd put me to death in a heart beat. It's these same people who killed people because their name was 'Omar' on their Id cards."

People,
Please ignore this Osama guy. He is just desperate for recognition.

Proverbs 14: 7 says, "Go from the presence of a foolish man, when thou perceivest not in him the lips of knowledge."

This guy is a joke. I hardly say that about anybody but I've read his comments and he is so desperate to protect his religion but he got refuted again and again, so what's the use of keeping acknowledging him?

I say this to him though:
REPENT while you can because allah is leading you to hell where he is. Only Jesus can save you. He died for your sins.

Osama said "I myself would get shot to death by certain "Muslims" for the beliefs that I have and for the certain groups that I oppose. I wouldn't trust being near Shias. I know they'd put me to death in a heart beat. It's these same people who killed people because their name was 'Omar' on their Id cards."

Osama, you have just admitted to being the following "islamaphobe", "bigot", "racist". Any time non muslims bring up subjects like this, or make statements similar to this, you jump in with those same acusations. It must be bad to label an entire group just because of their religion. you evil person you.

"I myself would get shot to death by certain "Muslims" for the beliefs that I have and for the certain groups that I oppose. I wouldn't trust being near Shias. I know they'd put me to death in a heart beat."

Osama I dont believe you. HOw dare you say Muslims would put you to death in a heart beat. I think your just being Islamaphobic.


Everyone knows that Islam is peacefull releigon.

I say we take up a donation to fly Osama out to Iraq to prove to him jmust how wrong he is and that Islam really is a preacfull religion.

No..let's not..let us not shatter his dream of a peaceful loving accepting religion such as Islam

Now, now RM, let's be realistic. We can't take up a collection to send Osama to Iraq and not do the same for Kim. :)

These people will never be free until there is no religion in the world.

Why are all religions culpable for the atrocities and persecution being committed by muslimes in the here and now?