Islamic Supremacist Complains of Discrimination after Leaving the University of Georgia 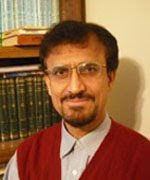 GEORGIA--An Arabic lecturer who resigned from the University made students uncomfortable with unwanted advice about religion and had difficulty teaching the language, according to students and an adviser.

Haider Bhuiyan was a lecturer of Arabic and Islam at the University from 2007 until he resigned after fall 2011.

In December 2010, the Equal Opportunity Office investigated Bhuiyan on allegations that he made inappropriate comments about religion and sexual orientation to students, according to documents obtained by the Red & Black and published in a Feb. 2 article. The EOO found no evidence of discrimination, wrote E. Janyce Dawkins, associate director of equal opportunity, in a letter to Bhuiyan.

A student, who wished to remain anonymous, took the University’s first four Arabic classes with Bhuiyan in the 2009-10 and 2010-11 academic years.

She said he made her and other students uncomfortable with “a lot of unwanted advice” about religion.

“Aside from his ability to teach Arabic, which was completely subpar, I was told by him on several occasions that being an Arabic girl in Georgia by myself was not a good idea,” she said.

She said Bhuiyan told her that as a Muslim woman, she shouldn’t live alone without male family members and shouldn’t be working so hard at her job.

“I went to office hours to talk about Arabic, and I got lectures about how I should quit my job and move back to Egypt,” she said. “I was told to join Muslim Student Association, go to Friday prayers, basically ‘be a better Muslim.’ All that made it really hard to interact with him as a teacher.”

The student grew up in Egypt and was raised Muslim, but she said she made it clear to Bhuiyan that she hadn’t practiced Islam since the age of 4.

Wanda Wilcox, an adviser for the Franklin College of Arts and Sciences, said another student complained to her about Bhuiyan’s inappropriate remarks about religion.

She said a male student in Bhuiyan’s summer Islam class told her Bhuiyan had said “very aggressive and very dismissive” things to a female student in the class who practiced a different denomination of Islam than Bhuiyan.

“As just a guy who was in there, he felt very badly for the girl that she was being attacked,” Wilcox said. When she learned the EOO was investigating Bhuiyan, she gave the male student’s name to the EOO.

The anonymous student also said Bhuiyan’s comments, rather than distinguishing between Muslims and non-Muslims, distinguished between “good” and “bad” Muslims.

“Our class was basically full of people who were just stunned by the things he said to us,” she said. (Read more.)

In a country that is around 300 million people in population, with only 6 million Muslims, it's really ridiculous for you to not wanting to cut us some break here! No one is screaming Islamophobia! Muslims don't play the race and religion cards often, because they're very well educated and established in the USA! But after the 9/11 lie, yes, much discrimination happened against Muslims.

So why don't you go eat your pork chops and leave the poor minority alone! You're really sounding like a ridiculous bigot now, David Matchsticks. What will happen to you when the 6 millions become 60? Will you drop dead from a heart attack or something??? Chill the hell out man and let us breath!!! If your beliefs weren't so weak, you wouldn't worry about 6 million Muslims existing around you.

Yeah, Osama. You don't cry Islamaphobia... except when you do in the same breath!

Hate crimes against Muslims don't actually happen that often. (There was a report showing hate crimes against Jews are TEN TIMES more likely) And yes, organizations like CAIR do in fact use the race/"Islamaphobia" card all the time, so either once again your lying, or your really ignorant.

Also, once again you dishonestly ignore the fact of how many of your co-religionist are killing, maiming and subjegating non-beleivers and why Mr. Woods and other kuffir are concerned.

But no, it must be Mr. Woods bigotry that causes him to persecute the poor muslims ("leave the minority alone!") by reporting truthfully the cases of muslims persecuting, killing, maiming and subjugating non-believers and using the Islamic scriptures to back up these actions.

That's the Muslim trick. Play nice when your the minority but suddenly when you become the majority the heads start rolling.


Why are you in America?

If you love Islam so much why don't you go live in a Muslim country?

@ Osama
No one is screaming Islamophobia! Muslims don't play the race and religion cards often, because they're very well educated and established in the USA!

Which part of the world do you live, if you live on planet earth you must be so ignorant muslims are soon going to put the word Islamophobia in the quran that’s how much it’s become an excuse they have killed thousands of people in the name of Allah and when anyone wants them to take responsibility for their actions they scream Islamophobia.

I'm sorry did you say they are very well educated and established? All I have to say about that is they are the same people who still believe the world is flat and it’s balanced a fish.
So why don't you go eat your pork chops and leave the poor minority alone! You're really sounding like a ridiculous bigot now, David Matchsticks. What will happen to you when the 6 million become 60? Will you drop dead from a heart attack or something??? Chill the hell out man and let us breathe!!! If your beliefs weren't so weak, you wouldn't worry about 6 million Muslims existing around you".

After studding a lot about Muhammad I have come to a conclusion about the pork thing, he wanted to eat all the pork in Arabia for himself that’s why he told his followers to stop eating it since it was always one rule for him and another for his followers, it tastes so good man you don't know what you’re missing.

I thank God for people like David who won’t chill and let you Muslims breath when you are killing Christians around the world every day. God forbid you will become 60 million we don't need 60 million paedophiles walking around

Yeah, but you'd LOVE from the deepest bottom of your hateful heart that they do actually occur! This is the load of crap that the anti-Islam bigots are trying to grow among the American nation.

"Yeah, but you'd LOVE from the deepest bottom of your hateful heart that they do actually occur! This is the load of crap that the anti-Islam bigots are trying to grow among the American nation."

I see. mearly pointing out the fact that hate crimes against muslims don't happen all that often MUST mean I want them to happen!

How am I a hateful bigot? I can find the report for you (not now, I'm late for work).

I didn't say they "sadly" don't happen or anything like that. Any kind of hate is bad. I, Foolster hereby renounce all hate crimes against muslims. Now, will you and your co-religionists do the same about hate crimes against non-muslims such as rape, murder and subjegation?

Please read and thing again about what I said about honesty. If all you can do is throw mud, then your probibly not on the side of truth.

Also, please look up the word "hypocrite" in the dictionary. You might want to also read Matthew 23.

Osama: here's that report. Not that truth will have any effect on you it seems. So much for "anti-muslim crap".

And once again, tghe reason sites like this blog and others like it exist is not because ofg anti-muslim bigotry, but because YOUR CO-RELIGIONISTS are ACTUALLY bloowing up, maiming, raping and subjugating non-believers, and these sites report on those happenings.

There is a legitamite concern. You don't show how these reported stories are false, or spend your time trying to convince your co-religionists to stop raping, maiming, killing and subjugating. No, you spend your time telling the reporters their hateful bigots for telling the truth!