If only Hysen Sherifi had learned about Islam from TLC's "All-American Muslim" instead of by reading the Qur'an and Hadith! 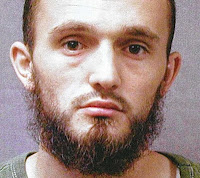 RALEIGH, N.C. – A North Carolina man sentenced to prison recently as part of a homegrown terrorist ring has been accused in a federal court document of plotting to kill witnesses who testified against him at trial.

An affidavit unsealed in federal court Monday accuses Hysen Sherifi of plotting against the witnesses from his jail cell. Authorities say an FBI informant posing as a hit man met with Sherifi's brother and a female friend and accepted $5,000 and a photo of an intended victim.

FBI agents have arrested the brother, Shkumbin Sherifi, and Nevine Aly Elshiekh, a school teacher. Now in federal custody at the New Hanover County Jail, each is charged with a felony count of use of interstate commerce facilities in the commission of murder-for-hire.

Hysen Sherifi, 27, was sentenced to 45 years in prison earlier this month in what prosecutors described as a conspiracy to attack the Marine base at Quantico, Va., and targets abroad. Five others, including construction contractor Daniel Patrick Boyd, have been sentenced to federal prison terms for terrorism charges related to raising money, stockpiling weapons and training in preparation for jihadist attacks. . . .

The Sherifi brothers and other family members emigrated from Kosovo following the wars that ravaged the former Yugoslavia in the 1990s. A call to the Sherifi family home in Raleigh on Tuesday was not returned.

Hysen Sherifi and others arrested in the terrorism conspiracy were members of the Islamic Association of Raleigh, the largest Muslim congregation in the Triangle. Several members of the mosque also routinely made the 4-hour round trip for the trial in New Bern to support the accused, who they described as innocent men being railroaded by overzealous federal authorities. (Read more.)

"The mad creation of an epileptic man probably high off of cave fumes."


This is hilarious good one Andish.

Hits a little too close to home for me....as in I live in Raleigh. Yikes!!
Now I gotta worry bout these guys too.