Of course, if this had been an anti-Muslim hate crime, you would have heard about it already. 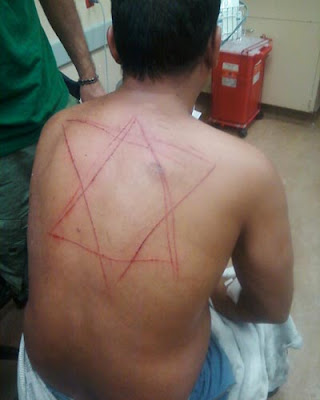 Nonie Darwish--About a year ago, I posted an Arabic language poem titled “Tears at the Heart of the Holocaust” on my website, ArabsForIsrael.com. The poem expressed its Arab author’s love for the Jewish people and his mourning over what happened to them in the Holocaust. The brave poet, Mr. Alaa Alsaegh, is an immigrant to the US from Iraq, who now lives in Missouri. Such poems did not sit well with the Muslim community, which caused Mr. Alsaegh to be alienated from it. He received threats because of his support for the Jewish people, was called an infidel and a traitor to Islam, but he continued with his writing of poems and did not take the threats too seriously.

Mr. Alsaegh, as well as Muslim critics and former Muslims who are accused of apostasy, are living under threats, but, lo and behold, if we dare to speak about our fears, we are immediately silenced and accused of being Islamophobes. The mainstream media insist that there is no need to fear Sharia or its enforcers in America and that we are exaggerating our plight from Islam. We are told that what happens in the Arab streets can never happen in the streets of America.

Tell that to Alsaegh, after the unthinkable happened to him, when on August 14, 2011 and in broad daylight and heavy traffic, he was viciously attacked on the streets of St. Louis, Missouri. According to Mr. Alsaegh, as he was driving at 10:30 in the morning on Compton St. near Park Ave., a small white car cut him off and hit his car, while another car stopped behind him. The occupants of the cars, some of whom wore security guard-type uniforms, quickly entered Alsaegh’s car, pointing a gun at him. They pushed his upper body down against the steering wheel, stabbed him and pulled off his shirt to expose his back. Then, with a knife, they carved the Star of David on his back while laughing as they recited his pro-Jewish poem. Mr. Alsaegh believes that the attackers could be Somalis, but he was not sure. After the attackers fled the scene, Mr. Alsaegh was surrounded by witnesses to the crime and was taken to the hospital. The photo representing this story was taken at the hospital.

After I learned of the attack on Mr. Alsaegh, I did not want to rush to judgment and waited until he told me that the FBI concluded that this was a hate crime. I believe that my article on this incident is the first to be reported in the media. This incident has been totally ignored by the mainstream media.

Why is it that attacks perpetrated by Muslims against Muslim infidels or honor crimes are ignored? Crimes done by Muslims against other Muslims who are considered apostates should alert the American public of what is coming to American streets if Muslims start increasing in numbers. The dirty little secret of Islamic hate and intolerance is clear from this story, and no one in the media cares to expose it and alert the American public. (Read more.)

May the Lord God who made you look after you young man.
American citizens must not tolerate these crimes against humanity.
But then, what are we to expect of Muslims-- they formed units in the SS and Hitler absolutely LOVED them.

Typical Islamophobes -reporting such a petty and un-newsworthy item.

And yet if an infidel so much as walks the wrong speed near a musloid, the musloid feels aggrieved and screams the house down!

God bless you Sir, and I wish you a speedy recovery.

Thank you Nonie for reporting on this!

Have sent to all my contacts.

What a way to show the truth to this gentleman !

I am sure the Muslim Clerics will issue a Fatwa against those who did this ... to defend Islam ... the peaceful religion ...

Can someone explain the timeline to me? Mr. Alsaegh's poem--or someone's, I don't read or understand Arabic--was posted at Nonie Darwish's website on September 27, not a year ago. According to the reports I've seen, he was attacked in August.

Nonie's blog has no reference to this attack that I can find.

Did she actually write the above? Why isn't it on her own blog? Can someone explain this thing to me? If this man was actually so brutally attacked, it's horrifying, but the story does not seem to add up right now.

Can someone explain this to me better?

My friend just look at the picture above ...