But perhaps we should ignore those who are suffering under Islamic oppression. After all, Anders Breivik wasn't a Muslim. 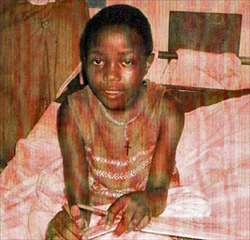 NAIROBI, Kenya, August 11 (CDN) — A 14-year-old girl in western Uganda is still unable to walk 10 months after her father tortured her for leaving Islam and putting her faith in Christ, according to area Christians.

Susan Ithungu of Isango village, Kasese district, has been hospitalized at Kagando Hospital since October 2010 after neighbors with police help rescued her from her father, Beya Baluku. He was arrested shortly afterward but quickly released, sources said.

Susan and her younger brother, Mbusa Baluku, lived alone with their father after he divorced their mother. In March 2010 an evangelist from Bwera Full Gospel Church spoke at Susan’s school, and she decided to trust Christ for her salvation.

“I heard the message of Christ’s great love of him dying for us to get everlasting peace, and there and then I decided to believe in Christ,” she said from her hospital bed. “After a month, news reached my father that I had converted to Christianity, and that was the beginning of my troubles with him. Our father warned us not to attend church or listen to the gospel message. He even threatened us with a sharp knife that he was ready to kill us in broad daylight in case we converted to Christianity.”

Pastor Joseph Baluku of Bwera Full Gospel Church in Kasese said neighbors took her to the government hospital about 45 kilometers (28 miles) from Kasese town after she was freed.

“He locked her up in a room of the semi-permanent house for six months without seeing sunlight,” the pastor said. “The younger brother was warned not to tell anyone that Susan was locked up in a room and was not given any food.”

Young Mbusa said that when their father was away, he roasted bananas for his sister.

“I also dug a hole under the door, where I could pour water through,” he said. “My sister could drink the water using her tongue. But most days she could only feed on mud.”

A nearby resident who requested anonymity said neighbors became concerned after not seeing her for several months.

“Her brother then disclosed to us that Susan was locked up in one of the rooms in the house,” the area resident said. “We then reported the case to the Harukunggu local council and then to the Bwera police station. The police went to the house and broke the door.”

Susan was immediately taken to the provincial government hospital about 17 kilometers (11 miles) away near Bwera town, where Pastor Baluku visited her.

“The miserable young Susan was bony, very weak, and not able to talk or walk,” said the pastor. “Her hair had turned yellow, she had long fingernails and sunken eyes, and she looked very slim, less than 20 kilograms [44 pounds].” (Read more.)

For more on Islam and apostasy:

Let us pray for this child with all our souls.
I've heard much about Jesus coming to them, freeing them from submission, allowing their souls to breathe.
No one should be made to suffer just because he or she wanted to be free from Islam.

A holy faith will preserve and even extend life in every way possible.
That which is wicked, sinful and profane can only degrade God's gift and take it away through pride.
There is no honor in Islam.
There is only pride. Indeed honor-killing should be called pride-slaughter, or pride-sacrifice.
These two appellations are much more accurate in its description.

Dear Dr. David,
I cried and I am still crying. I did ask a question some time back which I must ask again to all the muslims: Why do you have to impose your religion on people? Even a child ca see the difference between JESUS CHRIST and Muhammad. Do you think really that by killing you will go to Heaven? Do you think the LORD isn't strong enough take anyone's life whenever HE wants? Why do you want to take away some thing that you cannot give. Only the LORD YAHWEH can give life and please allow HIM laone to take it when HE wants. Please investigate your sources. Muhammad isn't going to Heaven please do not follow him.

Susan MAY THE LORD YAHWEH RECREAT any part of you body that broken or wounded IN JESUS' NAME AMEN and I pray that HE'D cover you with the HOLY PRECIOUS BLOOD OF THE LAMB, I also do pray for your father to be convicted by CHRIST and follow HIM AMEN.

Dr. David, I'm very sad. MAY the LORD YAHWEH BE with you AMEN.

Wow, no comments on this, i will pray for her and for those who are persecuted.!

Bless the little lady, Lord. Bless the her brother as well. Her father needs to be delivered and have his eyes opened. Islam is chaotic and brutal.

I am broken hearted over this. I pray for peace, comfort and restoration for this girl and her brother. I hope the father loses custudy and they can be better cared for under God's wings. Come Lord Jesus!! The persecuted church needs to be delivered!