We're shocked when an act of terrorism is committed here in the West, because terrorism is rare in non-Muslim countries. Yet violence is so prevalent in the Muslim world, it scarcely raises an eyebrow. The following list compares violent terrorist attacks committed in the name of Islam with those committed in the name of all other religions combined. The list covers only the short period since Ramadan began. (Visit TROP for daily updates.) 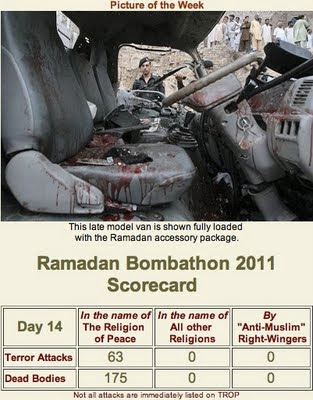 Brother David has got this picture from the website - thereligionofpeace.com

Don't forget to type the "the"

answering muslims also advertises that website, but if in case somebody didn't notice, thats why I gave the site name. That site is also a great site.

Brothers and sisters,
please pray for us in Indonesia. There was one christian named Rudy Yohanes Hutagalung on Facebook who challenges muslims for debate, but now the muslim organizations here have urged police to put him to jail. Please pray for him, and for the rest of us who are actively debating muslims in Indonesia.

Churches cannot be built on streets with Islamic names in Jakarta Indonesia. Interesting!