Muslim Family Targeted by Muslims after Daughter Marries Christian . . . in the U.K.

But we should remember that there are no differences between Muslim culture and Western culture, and that Anders Behring Breivik was not a Muslim. 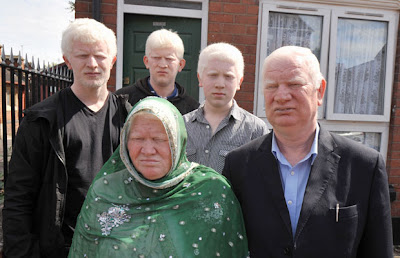 United Kingdom--The head of a Coventry family of albino Muslims has pleaded for an end to a campaign of “honour” harassment which began after his daughter married outside the faith.

The Parvez-Akhtar family, of Edgwick, has been subjected to vicious attacks because eldest daughter Naseem wed a Christian.

House windows have been smashed, their cars vandalised and they receive constant hate mail.

Aslam Parvez, aged 53, blames members of the Muslim community who believe the family have been dishonoured by his daughter’s marriage.

He contacted the Telegraph to issue a public appeal in a desperate bid to make the culprits stop.

“We’re a good family and have done nothing wrong yet we’re being punished in the name of honour,” he said.

The hate campaign started five months ago when a national magazine published an article on albinos which featured Naseem, who no longer lives in Coventry and has little contact with her family.

It revealed how she has married a Christian, goes to church and is expecting her second child with her husband.

Mr Parvez says copies of the article were quickly spread maliciously, and were posted on walls near their house and through the doors of Muslim homes in the community.

Mr Parvez says he has received numerous death threats and has spent hundreds of pounds installing security cameras around his house. (Read more.)

Muslims often say: "we see all the time christians becoming muslims and posting it in Youtube" and we say "haven't it crossed to your mind that maybe it's because Muslims don't take very well the idea of ppl leaving islam that noot so many muslims becoming christians can do the same" then they say "maybe in Muslims countries(which is very revealing), but what about Westerns?" and now we can say "it's the same if you live among muslims" Ican't understand how ppl can think this hate related religion is actually related to Jesus.

Reading the comments on that article most people bang on about muslim women being allowed to marry "people of the book" not just men. Perhaps they would like to tell that to every man who has beaten their daughters to death for falling in love with one. Morons.

Islam is a religion of peace and tolernce.

Koala: I thought Muslim men could marry a Christian woman, but that a Muslim woman could only marry a Muslim man.

After 9/11, this is what the United States brings to the United States. Perverts as language interpreters for the Defense Department. Question: Will C.A.I.R. support this pervert and provide assisstancebecause he is a Muslim?