Instead of reading the peaceful Qur'an, Betim must have been reading al-Qaeda's radical handbook. Here are some excerpts from al-Qaeda's "Manual of Jihad":


"Fight those who believe not in Allah nor the Last Day, nor hold that forbidden which hath been forbidden by Allah and His Messenger, nor acknowledge the Religion of Truth, from among the People of the Book, until they pay the Jizyah with willing submission, and feel themselves subdued."

"Surely Allah has bought of the believers their persons and their property for this, that they shall have the garden; they fight in Allah's way, so they slay and are slain."

"O you who believe! fight those of the unbelievers who are near to you and let them find in you hardness."

"Muhammad is the Messenger of Allah, and those who are with him are severe against disbelievers, and merciful among themselves."

Ha! Tricked you! These quotations are all taken directly from the Qur'an. No danger of radicalization from a book that commands adherents to "fight those who do not believe in Allah." 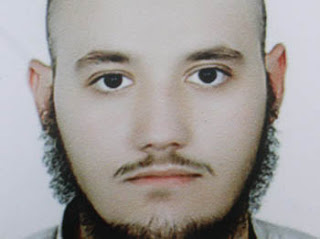 New York--A Brooklyn high school dropout was convicted Thursday of conspiring to join a foreign terrorist group so he could kill U.S. troops in Afghanistan.

Betim Kaziu faces life in prison for the jihadi adventure that took him to Saudi Arabia, Egypt and finally Kosovo - where he was arrested in 2009.

The jury deliberated less than four hours before reaching a verdict in the two-week trial in Brooklyn Federal Court.

Kaziu smiled and waved to his parents, who emigrated from Macedonia.

"I need my son home," Kaziu's father said outside court.

Kaziu, 23, wanted to become a member of the Taliban or the Somali-based Al Shabbab so he could die a Muslim martyr on a battlefield in Afghanistan, Pakistan, Palestine or Africa.

"He never intended to return to the United States. He hoped to die a martyr. "

Flush with cash from a court settlement for a playground accident, Kaziu traveled overseas with a buddy from Mill Basin who chickened out of the scheme and returned to Brooklyn to eventually became a government cooperator.

Defense lawyer Joshua Dratel argued that a trove of militant videos - including some from hate-spewing Osama bin Laden and Anwar Al-Awlaki - found on Kaziu's laptop computer don't make him a terrorist.

Kaziu had made a so-called martyrdom video in Albania before he was arrested.

"I came here with the brothers to chill before I, God willing, depart," Kaziu said as he stood on a cliff above the sea. (Source)

I'm sure glad the USA military helped the muslims in Serbia/Bosnia since they so often express their gratitude by plotting to kill our soldiers. The US military must start being honest about possible problems with people of islamic background.

Mike this is not totaly true, in Bosnia the embargo on the weapons gave a big advantage to Serbia against unarmed bosniaks or muslims.
Furthermore, if Betim Kaziu was in Kosovo, and came from Macedonia, i think that he must be albanian, not bosniak.
So the US position in Bosnia is irrelevant here.