Radical Methodists? Extremist Quakers? Fundamentalist Presbyterians? Since all religions supposedly teach the same thing, we can only hold our breath and wait to find out who's responsible for the latest terrorist attack in Mumbai. 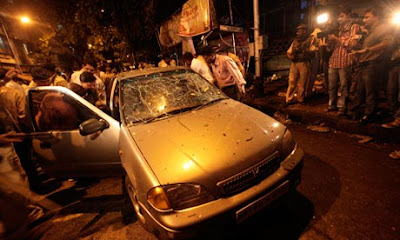 FOXNEWS--Three separate explosions tore through a business district in India’s Mumbai Wednesday, leaving at least 17 people dead and 141 injured, authorities said. Less than an hour after the series of blasts, its Home Ministry confirmed a terrorist attack and placed the entire city on high alert.

Although no group claimed responsibility, the explosions hit locations where a terror siege nearly three years ago killed 166 people. Wednesday also coincided with the birthday of the lone surviving gunman of the 2008 attack.

Arup Patnaik, a top police officer, said the attackers used improvised explosive devices in the attack, hidden in an umbrella in the Jhaveri Bazaar jewelry market and kept in a car in the business district of Opera House.

Indian officials say they believe the responsibility of Wednesday's attack rests with the Indian Mujahideen, a group that works closely with Lashkar-e-Taiba.

Lashkar-e-Taiba is the group suspected to be behind the 2008 attack.

All three blasts happened from 6:50 p.m. to 7 p.m., when all the neighborhoods would have been packed with office workers and commuters. (Read more.)

Brother David, this is where I live. Although I don't live in Mumbai. But I live in this country. Perhaps you remember me... I told you that once I was atheist and now Christian since 2007, i said you and I have a similarity.. we both are former atheists.. then I asked you and brother Sam Shamoun some questions and you people cleared my doubts( thanks once again )..I asked you some questions regarding Horus and Jesus..regarding the movie Zeist Geist..you people cleared my doubts..thanks to you people so much for helping people like me. I keep watching your debates. I have almost ALL of your debate videos. You, brother Sam, Nabeel, Brother James, Mary Jo sharp, Robert spencer... you all are very helpful for us. Although I don't post comments but I visit these sites. And I tell you, if one thousand people are responding and posting comments, then I think at least ten thousand people are watching these. I think you people have reserved seat in heaven with Jesus.ha ha.......no no, seriously. you people are very very helpful. you people are not only converting people to Christianity, by your debate videos and all, but you people are helping millions of Christians to remain Christians. God bless you people so much so much so much.
And..anyway, this blast is just a beginning...according to the interview given by terrorists of the past blast few years ago. I was watching in TV news, they were saying something like - this( the past one ) is just beginning. we used to attack your country from outside, now we will destroy your country from both outside and inside. Today's news paper shows that Manmohan Sing( our president ) and Obama are planning to solve the problem. But I just want to tell that the messages of the terrorists of previous attack were not for this country alone. This is for you people and Europe also. To me, Europe and USA are like beautiful flower gardens. But I don't know how long the gardens will remain bloodless.

hmm....religion of peace? More like piece. A piece of C-4, a piece to dentonate, a person who thinks blowing himself to pieces is the only way to heaven.
Isn't it remarkable that the only relgion glued together from Sabian prayer rituals, Jewish and arabic fairy tales, copied stories from the bible and a couple of arabic gods has been able to maintain it's pieceful religion.

I think it was done by the quakers lol i dont even know if there are still quakers in the world.

Hasn't Mumbai had enough of this??

Apparently those peaceful Muslims don't think so GAP, especially since this has been linked to the Indian Mujahideen