But don't say anything, since it's wrong to judge another person's culture. It would be both racist and bigoted to object to such practices. 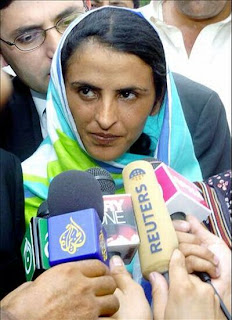 MULTAN, Pakistan, April 21 (Reuters) - A Pakistani victim of a village council-sanctioned gang-rape, who became a symbol of the country's oppressed women, said on Thursday her life was in danger after the Supreme Court acquitted 13 men accused of the crime.

Mukhtaran Mai was attacked on the orders of a village council in 2002 as a punishment because her brother -- who was 12 at the time -- was judged to have offended the honour of a powerful clan by allegedly having an affair with one of its women.

Mai was an illiterate villager at the time but she defied taboos and shot to global fame by speaking out about her ordeal and taking her attackers to court.

Mai had accused 14 men of being involved in raping her and in 2002, a court sentenced six of them to death while acquitting the others citing a lack of evidence.

But in an appeal, the Lahore High Court not only upheld the eight acquittals but also overturned five of the six convictions. The death penalty for the sixth man, Abdul Khaliq, was commuted to life in prison.

Mai appealed to the Supreme Court in 2005 but it rejected her appeal on Thursday, said Gohar Ali Shah, a lawyer for Mai.

"I'm disappointed. Why was I made to wait for five years if this decision was to be given?" a sobbing Mai told Reuters by telephone from her village in the eastern province of Punjab shortly after the court announced the decision.

"The accused can kill me and my family when they return home," Mai said.

Her courage in defying centuries-old rural customs of repressing women won her human rights awards and made her a role model for many women in Pakistan.

She is running a school for girls in her village with donations from the government and supporters at home and abroad.

Mai said she would neither flee her village nor the country.

"Life and death are in the hands of Allah ... I will not shut my school and other projects," she said.

The group Human Rights Watch expressed dismay at the court decision, saying the attack on Mai was a "crime that took place in full public view and the perpetrators were publicly identified".

Here's a video of Mai from a few years ago:

God Bless this brave, wonderful woman!
Why isn't the world talking, writing and thinking, every single day, about the courage of those who face the oppression of tradition and meet it with fortitude for the sake of others?!

This is a sickening truth about Pakistan. How can a president restrict her movement, when she has gone through allot already. Instead he should support her emotionally by bringing her up in the media so that the world can see this is the right way...also will help her wash away her sorrow. Shame on government who was part of this digesting act and shame on people who conducted assault on her.