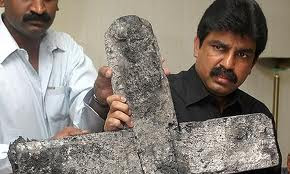 Bhatti, a Roman Catholic and former leader of Pakistan's main minority-rights group, was killed eight weeks after Salman Taseer, governor of Pakistan's Punjab province, was shot to death by one of his bodyguards. Both men had called publicly for changes to the country's blasphemy law, which prescribes the death penalty for anyone convicted of insulting the Prophet Muhammad.

Bhatti's assassination is likely to deepen fears of even talking about the blasphemy law, said S.K. Tessler, a Christian retired army colonel who served as minority affairs minister under the military regime of former president Pervez Musharraf. (Read more.)

Here's footage of Bhatti a month before his assassination.

Now that is a man of God.

Wow. He has paid the full price and has entered into his rest. Who will now speak for the Afgani Christians, indeed who will speak for all those who simple wish to live in peace and not live under Sharia. May God comfort his family and may God shelter the Christian community.

I posted this story from the associated press on my blog @ http://knowthetruthaboutislam.blogspot.com/2011/03/another-christain-murdered-in-pakistan.html

This story saddens me so. 1 by 1 the voices of reason are being extinguished. Bhatti's bravery was impressive and I pray he did not die in vain.

Muslims have again shown how peaceful they are. Shahbaz was a brave man who was waiting for this moment. He was killed for fighting for the rights of Christians in Pakistan. Cowards got him but could not win his soul.Jesus said if you lose your life for Me you will save it. Muslims feel sorry about the incident but no one dares to talk about the blasphemy law which is the root of the evil. I dont know what media coverage this news is getting; but Shahbaz's words on BBC are great witness to Jesus.

"In leaflets left at the scene, al-Qaida and the Pakistani Taliban Movement in Punjab province claimed responsibility. They blamed the government for putting Bhatti, an "infidel Christian," in charge of an unspecified committee, apparently in reference to his support for changing the blasphemy laws.

"With the blessing of Allah, the mujahedeen will send each of you to hell," said the note, which did not name any other targets." " [*]

A great man, an enourmous Christian... may God accept his in his heart and help his family and all persecuted Christians in Pakistan and other countries...

You have heard that it was said,‘You shall love your neighbor, and hate your enemy.
But I tell you, love your enemies, bless those who curse you, do good to those who hate you, and pray for those who mistreat you and persecute you, that you may be children of your Father who is in heaven.

Blessed are the peacemakers, for they shall be called children of God.
Blessed are those who have been persecuted for righteousness’ sake, for theirs is the Kingdom of Heaven.
Blessed are you when people reproach you, persecute you, and say all kinds of evil against you falsely, for my sake.
Rejoice, and be exceedingly glad, for great is your reward in heaven.

Shabaz Bhatti was a Christian fighter who loved God more than his own life, I hope that his death will encourage Christians to stand up for truth and justice wherever they live, whatever the cost.

Really moving when he talks about the Cross where the Lord Jesus gave his life!
He was prepared to meet is Lord.

HI EVERYONE I JUST WANT TO LET EVERYONE KNOW THAT WE R HAVING A PROTEST IN TORONTO ON CANADA ON FRIDAY MARCH 4 AT 1PM. SO PLEASE JOIN US WHOEVER CAN COME OUT.

PLEASE take the time to forward this event to anyone you know in the Toronto area.

Join us in protesting this heinous injustice, and the many others that are committed REGULARLY under the guise of Pakistan's "blasphemy" law.

Let us stand up for our brothers and sisters in Pakistan and all around the world who's voices can not be heard.

Please also pray for those who are attending, that our small actions can cause impact in whatever way God has planned for us.

Thank you all and God bless!

The Lord has stretched out his hand and taken Shahbaz to redemption and the spiritual kingdom.
He has shown His power in the dutiful bravery and virtue of this man; truly, many are called, but few are chosen.
Honor him with all your heart.

There will be a second rally/protest taking place in Hamilton, Ontario on March 8th @ Hamilton City Hall from 2-4pm.

Please forward this to anyone you might know who is in the area!!

Thank you very much and God bless!