Geert Wilders: "The Lights Are Going Out All Over Europe"

The lights are going out all over Europe. All over the continent where our culture flourished and where man created freedom, prosperity and civilization. Everywhere the foundation of the West is under attack.

All over Europe the elites are acting as the protectors of an ideology that has been bent on destroying us [for fourteen centuries]. An ideology that has sprung from the desert and that can produce only deserts because it does not give people freedom. The Islamic Mozart, the Islamic Gerard Reve [a Dutch author], the Islamic Bill Gates; they do not exist because without freedom there is no creativity. The ideology of Islam is especially noted for killing and oppression and can only produce societies that are backward and impoverished. Surprisingly, the elites do not want to hear any criticism of this ideology.

My trial is not an isolated incident. Only fools believe it is. All over Europe multicultural elites are waging total war against their populations. Their goal is to continue the strategy of mass-immigration, which will ultimately result in an islamic Europe - a Europe without freedom: Eurabia.

The lights are going out all over Europe. Anyone who thinks or speaks individually is at risk. Freedom loving citizens who criticize islam, or even merely suggest that there is a relationship between islam and crime or honour killing, must suffer and are threatened or criminalized. Those who speak the truth are in danger.

The lights are going out all over Europe. Everywhere the Orwellian thought police are at work, on the lookout for thought crimes everywhere, casting the populace back within the confines where it is allowed to think. 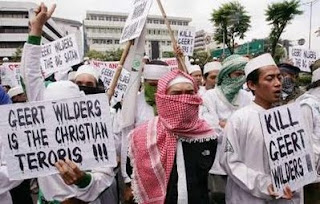 This trial is not about me. It is about something much greater. Freedom of speech is not the property of those who happen to belong to the elites of a country. It is an inalienable right, the birthright of our people. For centuries battles have been fought for it, and now it is being sacrificed to please a totalitarian ideology.

Future generations will look back at this trial and wonder who was right. Who defended freedom and who wanted to get rid of it.

The lights are going out all over Europe. Our freedom is being restricted everywhere, so I repeat what I said here last year:

It is not only the privilege, but also the duty of free people - and hence also my duty as a member of the Dutch Parliament - to speak out against any ideology that threatens freedom. Hence it is a right and a duty to speak the truth about the evil ideology that is called islam. I hope that freedom of speech will emerge triumphant from this trial. I hope not only that I shall be acquitted, but especially that freedom of speech will continue to exist in the Netherlands and in Europe.

The lights are indeed going out all over Europe. With Christians being harassed and taken to court in Dearborn, Michigan, things are no picnic here in the U.S. either. 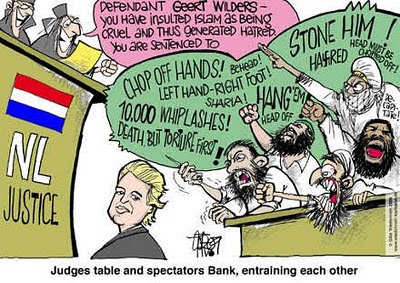 The lights are going out not only in Europe:

Here's a very incomplete list of organizations or people self-censoring, hiring bodyguards, going into hiding, or getting killed or wounded after receiving death threats and violence from Muslims following the example of Muhammad, who said there would be no punishment for murdering someone who had insulted him.

The growth of Islam means the death of civil liberties. It's time to resist in every legal way possible.

Prophetic statements by Geert Wilders. He is the Winston Churchill of Europe and a great hope for survival of Western civilization. The delusional leftists and liberal politicians, the main stream PC media, are all a bigger threat to freedom and liberty than the fanatic followers of Islam. It is a pity that Europe has no other prominent politicians who have the knowledge and guts to stand up against the evil threats posed by Islam. The media and the political elite are displaying perfect dhimmitude, obsessed with non-workable multiculturalism, bending backwards to appease fanatics. They are behaving like either they are ignorant of Islam or appear to be literally afraid of fanatics. They are terrified may be the fact because they show enormous courage and conviction in mocking, criticizing and ridiculing Christianity and right wing activists just because it is the easiest thing to do as there is no fear of backlash or reprisals. For how long they can continue to fool the public and allow destruction of Western culture and values? There is need to exposing their cowardly nexus with Islamists. Only when they realize that they will be booted out of power, they may change their ways and try to save Europe.
In many ways, Europe is well on course for total Islamization if the levels of Muslim immigration continues and growing Muslim population fails to integrate with mainstream life. Something may be done about immigration. It is impossible to do anything about their ghetto like segregated living and culture mentality. Thus, integration is only a wishful thinking. The already entrenched Muslim population is sufficient to demographically out breed and effect the required change within 50 to 75 years. As they breed at a rate 3 to 4 times higher than that of natives, it is just a matter of time before they attain majority. At levels 15 to 20%, terrorism will be complimented with a brutal civil war unleashed on one pretext or other. It will be an unending nightmare for the European countries. If they still manage to survive, the first democratic election that throws up Islamic majority will be the last one. It is the ultimate bloodless coup that can Islamize Europe if all violent efforts fail. This is precisely what the visionary Geert Wilders is saying when he begins his speech with “The lights are going out all over Europe.” Only a true moron can term this as scare mongering.