Now where would a Muslim ever get the idea that he should attack unbelievers?

Now it all makes sense. 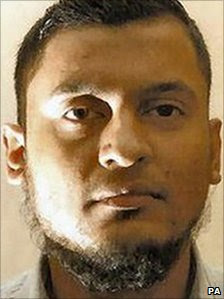 A former British Airways computer expert has been found guilty of conspiring with a wanted terrorist to blow up a plane.

Rajib Karim, 31, used his position at the airline to plot an attack with Anwar al Awlaki, a notorious radical preacher associated with al Qaeda.

The privately-educated Bangladeshi national, who moved with his wife and son to Newcastle in 2006, led a double life, jurors heard.

He was "committed to an extreme jihadist and religious cause" and was "determined to seek martyrdom" but hid his hatred for Western ways from colleagues.

His techniques for siphoning information from BA were described as like a "John le Carre-style" plot.

He used his access to the airline's offices in Newcastle and at Heathrow to encrypt confidential information in spreadsheets and also held a secret meeting with fellow Islamic extremists at Heathrow.

But Karim, described as "mild-mannered, well-educated and respectful" by his colleagues, never aired his extreme views.

When he was arrested while sitting at his desk in BA's IT department in Newcastle in February last year, his colleagues were left shocked.

While in Bangladesh, Karim was lured into becoming an avid supporter of the extremist organisation Jammat-ul Mujahideen Bangladesh (JMB) by his younger brother.

But their plan to live in an Islamic state was put on hold when Karim moved to England in December 2006, fearing his son was dying of cancer. (Read more.)

We should be very grateful for Western law enforcement. It seems like every time terrorism is mentioned in the news, it's about a foiled attempt. Awesome!
=)

I recently watched a video (which was on Minoria's site) with two British guys, one Muslim and one Christian, discussing if Britain is too soft on Islam. If I recall correctly, the Muslim gentleman said that Islam is always painted in a negative light by the media.

Well, I think Muslim extremists should be blamed for putting Islam in a negative light, and not journalists. It's not like journalists are trying to spread Islamophobia. What are they supposed to do? Not report terrorism?

During the last Eid al-Adha, Muslims were under persecution due to Christian intolerance in Greece. The Christians threw rocks and other objects at the Muslims during their prayers. And what was the headline that day?

The journalist, far from having bad motives, was only reporting news. The religious motivation behind the Christians' actions was relevant to the report, thus it was explicitly stated. Is this a sign of "Christenophobia"? Certainly not. Likewise, mentioning that a terrorist is motivated by Islam (whether it be only partially so) can hardly be called "being hard on Islam."

Considering that Islamic extremism is getting to be more and more of a problem in the world, maybe some journalists should make attempts every once in a while to not mention Islam too much when reporting terrorist attacks/attempts, lest Muslimophobia, if you would allow me to invent a more appropriate word, becomes any worse than it may be now. But no one should demand that we keep Western citizens in the dark about things.

The irrational would apply to fear of Muslims who agree with human rights,with no ifs,buts or maybes.

But it is not irrational to fear CAIR,ISNA,Anjem Choudary,and the many imams in the West who want Sharia Law in the West.

About the Greek Incident

I had read a bit of it but I think,I could be wrong,it was just Greeks.That they did not say:"I am a Christian."

In fact,the great majority of Greeks do not believe in Christianity.

In these articles on the attacks it never says it was Christians who did it:

He is quite scholarly,and I admire his dedication to tackle the question of if there are real scientific miracles in the Koran.

In my latest article I gave the link to his blog plus 2 links to2 of his articles in the blog.

I want him to know his effort is being appreciated and is making a difference.

Here is the article,about Al-Jazeera and Qaradawi,where I added the links to his blog: