The Qur'an commands Muslims to "fight those who believe not in Allah" (Qur'an 9:29). As we read about more and more terrorist attacks and attempts in the media, we're slowly learning that some Muslims actually take Muhammad's teachings seriously. 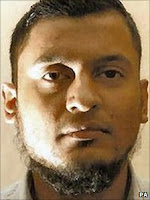 A British Airways employee conspired with a radical preacher to blow up a US-bound aeroplane, a court has heard.

The computer expert worked for the airline in the city and had access to BA offices there and at Heathrow.

Mr Karim, 31, denies plotting to blow up an aircraft and gaining a UK job to exploit terrorist purposes.

The Bangladeshi national has already pleaded guilty to three other terror charges, the jury was told.

On the first day of the trial, the court heard how Mr Karim came to the UK in 2006 and got a job with BA.

It is alleged that he was communicating with a terror cell as well as Anwar al-Awlaki, who has never been caught and is believed to be hiding in the mountains of Yemen.

Jonathan Laidlaw QC, prosecuting, said the defendant was preparing himself or others for terrorist attacks.

He said the court would hear that Mr Karim was an extreme jihadist.

"He believes that terrorism, including the murder of civilians, is permissible to establish a true Islamic state.

"The defendant was anxious himself to carry out such an attack and he was determined to seek martyrdom - to die and to sacrifice himself for his cause," Mr Laidlaw said. (Read more.)

Hmmm. Now where would this guy get the idea that martyrdom is important in Islam?

Sunan An-Nasa’i 3099—It was narrated from Abu Hurairah that the Prophet said: “Whoever dies without having fought or having thought of fighting, he dies on one of the branches of hypocrisy.”

Sunan Ibn Majah 2763—It was narrated from Abu Hurairah that the Messenger of Allah said: “Whoever meets Allah with no mark on him (as a result of fighting) in His cause, he will meet Him with a deficiency.”

Dunno if this is as good a place to throw in a comment but Hey : D I dropped in here before before the site theme changed and I got a nice welcome comment.

I wanted to throw this out before on a little debate where the bible wouldn't be look at under the belief that it is false, so I wondered in how much parts this article could agree to Muslim/Muslim understander readers:

This has nothingue to doo with religion; it's onlie a political motivated issue as WomenforLies101 saies... sure... and a moderate muslim is as frequent as an unicorn...

The story over at the Daily Mail has more detail, including tidbits like:

"In late 2009, Karim became depressed that he had failed to achieve an attack and offered to wage war in Afghanistan."

There is also an email exchange with al-Awlaki with thoughts about how desperate he was to join the jihad and how he had sympathetic friends working at the airport.

It also says he originally went to the UK for medical treatment for his sick son. Thanks alot, huh?

Hear it from someone (me) who was born and brought up in Bangladesh: this person is not the first and he won't be the last. Media says Bangladesh is a very moderate/liberal muslim country but those who live in there know very well it's not true. Islam hasn't brought anything peaceful to the world no matter how hard you try to prove it otherwise