Muslims constantly tell us that the West needs Islam, and that Muhammad's teachings will rescue us from immorality. But the more we look, the more we find that Muslims are doing the same things they condemn other people for doing. This should come as no surprise when the moral failures are related to money, since Muhammad relied on greed to spread Islam.

According to the Qur'an, one of the main uses of alms is to entice people to Islam.

Qur'an 9:60—The alms are only for the poor and the needy, and those who collect them, and those whose hearts are to be reconciled, and to free the captives and the debtors, and for the cause of Allah, and (for) the wayfarer; a duty imposed by Allah. Allah is Knower, Wise.

Muhammad made an enticing guarantee to those who joined him in his struggle:

Sahih Al-Bukhari 2787—[Muhammad said]: "The example of a Struggle in Allah’s Cause—and Allah knows better who really strives in His Cause—is like a person who fasts and prays continuously. Allah guarantees that He will admit the Struggler in His cause into Paradise if he is killed, otherwise He will return him to his home safely with rewards and war booty."

If a seventh century pagan Arab rejected Islam, he was guaranteed nothing. He may be poor all his life, and he wouldn’t know what would happen to him when he died. But Muhammad guaranteed that if a person dies fighting Islam’s enemies, he will enter Paradise, and that even if he survives, he will return home "safely with rewards and war booty." Either way, pagans were much better off (financially) if they became Muslims.

This promise of rewards and war booty was an important factor in the early spread of Islam. Indeed, using war booty to win converts was part of Muhammad’s strategy. For example, when Muhammad was accused of distributing the spoils of war unevenly, he replied, "Are you disturbed in mind because of the good things of this life by which I win over a people that they may become Muslims while I entrust you to your Islam?" (Ibn Ishaq, p. 596). Imam Muslim adds: "[W]hen the Messenger of Allah conquered Hunain he distributed the booty, and he bestowed upon those whose hearts it was intended to win" (Sahih Muslim 2313).

Muhammad’s promises of wealth were so great that, when difficulties arose, his followers sometimes complained that he wasn’t delivering on all that he had promised:

Ibn Ishaq, pp. 453-454—The situation became serious and fear was everywhere. The enemy came at them from above and below until the believers imagined vain things, and disaffection was rife among the disaffected to the point that Ma’attib bin Qusyahr brother of B. Amr bin Auf said, "Muhammad used to promise us that we should eat the treasures of Chosroes and Caesar and today not one of us can feel safe in going to the privy!"

These passages stress the importance of wealth and booty as a motive for conversion. Muhammad promised his followers that they would one day spend the treasures of Caesar. He distributed war booty after every military campaign, and he used his wealth to win converts. Thus, many early Muslims embraced the religion with impure motives, yet Muhammad saw nothing wrong with such conversions.

Since Islam encourages greed and uses greed to entice people to Islam, should we be surprised when Muslims squander charitable donations?

The Star—Devout Muslims donated hundreds of thousands of dollars to one of Canada’s largest Islamic organizations on the promise that the cash would be used to help the poor.

But only one in four dollars donated to a special pool of money at the Islamic Society of North America Canada (ISNA Canada) actually reached the needy.

Mismanagement of more than $600,000 is among the findings in a scathing audit obtained by the Star.

A “very small portion . . . is distributed to the poor and needy and the major portion is spent on the administration of the centre,” concluded the 2010 audit of the previous four years. 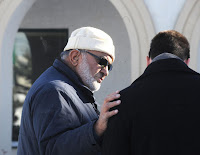 ISNA Canada is embroiled in controversy, with the audit revealing the practice of giving free perks to family members of a top official; the improper issuing of charitable tax receipts; and the diversion of charity money to private businesses. At the centre of it all is long-time secretary general Mohammad Ashraf, who has recently announced he is stepping down.

Ashraf would not answer a series of questions from the Star.

“Don’t ask me anything,” Ashraf told a reporter who visited the organization’s Mississauga headquarters, marked by a graceful minaret overlooking the Queen Elizabeth Way. The 73-year-old microbiologist said he is “being transitioned into retirement” and that he is “restricted” from commenting on the audit. (Read more.)

Email ThisBlogThis!Share to TwitterShare to FacebookShare to Pinterest
Labels: ISNA

That's a really good point about pagans being financially better-off by converting to Islam and fighting.

Anyway, I can't imagine how disappointed the Muslims who donated the money must be about this--their hard-earned money, which they gave with the intention of helping the poor, WASTED. That's just sick. Let's hope that the fraction of the money that DID get to the poor does good. It's unfortunate that a lot of religious organizations, including churches, have exploited the generosity of worshipers. This news just goes to show that we should all be careful where we put our money.

Islam is very much a 'religion' of this world. So another front in our struggle against it - in additional to the spiritual and theological battles - must be to alter the material cost/benefit ratio of being a Muslim, which is currently very much in Islam's favor.

I realize this is off the subject, but could someone explain this to me? I just read the whole article and it said some of the money went to health care for Ashraf's daughters.

I thought health care in Canada was free. No?