After every Islamic terrorist attack, we hear Muslims warn of the impending anti-Muslim backlash. The mythical anti-Muslim backlash, however, never actually materializes. Instead, Muslims become more emboldened in their push against the West, and Muslim hatred of non-Muslims always manages to outstrip non-Muslim anger towards Muslims. Shockingly, bullying of non-Muslim children is quite common in schools. Where do 12-year-olds learn to hate like this? Could it be . . . at home? 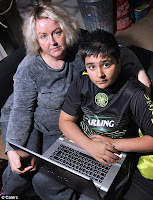 A gang of 12-year-old pupils made up of five Muslim boys and one non-Muslim girl made death threats to Darius Gill involving knives and knuckle-dusters because of his support for British troops.

One member of the gang also posted a picture of himself holding a rifle and threatened to hijack a plane.

The campaign was backed by more pupils belonging to a self-styled ‘Muslim Defence League’ celebrating British deaths in Afghanistan.

The abuse was so serious that police are now investigating.

On November 11, Darius – whose father is Asian – wrote on Facebook: ‘RIP to all the lads who never made it home.’

He was then branded ‘racist’ and two of the accused pupils began a flurry of online messages to each other setting out what they were going to do to him.

One wrote to Darius on Facebook criticising him for failing to acknowledge the dead Muslim soldiers in the Middle East.

Darius explained that Remembrance Day honoured British troops and pointed out that he was paying tribute to his great-great uncle, who died aged only 17 on the first day of the Battle of the Somme in 1916.

The students attend the 1,250-pupil Sidney Stringer Academy in Coventry. Muslim pupils make up 65 per cent of the school, which caters for children aged 11-18.

The main six pupils, none of whom can be named for legal reasons, have now been suspended and may be expelled over their chilling threats.

One of the online messages – which were littered with spelling mistakes – read: ‘Fight on Monday gonna be heavy knuckle dusters and knifes hopefully I don’t die.’

One pupil’s Facebook profile is full of chilling references to Islamic fundamentalism and shows a picture of him posing with an AK47 rifle.

He also penned a terrifying poem about hijacking a plane.

On November 12, he wrote: ‘You better watch what the **** flies outta ya mouth. Or I’ma hijack a plane and fly it into your house.

Fortunately, Darius’s mother Clare Allington read the comments on her son’s Facebook page on Monday morning – the day of the promised attack – and immediately pulled her son out of school.

Yesterday, Mrs Allington, 42, a mature student from Coventry, said: ‘I logged on and it broke my heart. I was reading all sorts about knuckle-dusters, knives and death.

‘They were planning to attack him at school that day so I rang the school straight away.’

But Darius Gill now says he feels scared to wear a poppy in future because of the vicious abuse.

She added that she usually keeps an eye on her son’s posts on Facebook every day but had not done so last weekend. She only read them on Monday.

She added: ‘If I hadn’t read the threats and pulled my son out of school he could be dead.

‘They might just be schoolchildren but they are fanatical and dangerous. The threats have to be taken seriously.’

Even yesterday, one of the yobs bragged about being quizzed by police and continued his online threats to attack Darius. He wrote: ‘Im in trouble wiv de police cuz of susspician of threat to Darius ... Im banggin Darius Thursday.’

He goes on to say he wants a one-on-one fight and demands that no one defends Darius.

Yesterday Darius said he was now too frightened to wear a poppy and claims he has been picked on at school because he is not Muslim.

Mrs Allington added: ‘My son wrote supporting the British troops in Afghanistan and also said he was sad so many soldiers had died.

‘The so-called Muslim Defence League, which has been set up in the school by a number of pupils, believe that Darius should join them in hating British soldiers. It’s appalling and extremely upsetting for Darius.’

Sidney Stringer Academy’s principal, Wendy Thomas, said Facebook was an increasing concern for schools. She said the children have been told to remove the comments from the site.

She said: ‘Darius is the victim of bullying. All the students involved have told me they did not mean what they said but they will learn a hard lesson from this.

‘Facebook is a big concern for schools and we urge all parents to monitor what their children say on the site. As soon as the school was notified about the comments on Monday we interviewed the pupils.

‘No weapons were found on any of the pupils. We notified the police and they are investigating.’

Yes, you read that correctly. After learning that one of her students had his life threatened by Muslims, the principal declares that Facebook is the real problem.
Posted by David Wood at 8:18 PM

Kids and guns should not go hand in hand !!!

Matthew 18:5-6
[Jesus says,] "Whoever receives one such child in My Name receives Me, but whoever causes one of these little ones who believe in Me to sin, it would be better for him to have a great millstone fastened around his neck and to be drowned in the depth of the sea."

May God have mercy on them who lead children (especially those who are of Christ's) astray...

I guess wiv speling like dat theirs nott nuch else u can du carrer wise hay.

Why am I not surprised? Muslims teach their children to hate and to terrorize from the day they are born. I have thought about things in the last few days. We are who we follow I try to follow Jesus's example, so Muslims follow Muhammad's. If Muhammad had a child bride and he is the perfect example who also raped captive woman than maybe we should think twice about letting our children around any Muslim?

Facebook is not the problem MUSLIM hatred towards non Muslims is clear. We need to get Islam banned in civilized societies.

In The Name of Allaah,
The Most Gracious,
The Most Merciful.

Peace be unto you.

"Facebook is not the problem MUSLIM hatred towards non Muslims is clear. We need to get Islam banned in civilized societies."

Praise be to Allaah, I do not hate non-muslims, nor do I want violence against them. My parents are christian. Yet, I am a muslim.

Subhana'Allaah, are you suggesting in the above statement that it should be illegal to practice Islaam (i.e. be a muslim) in countries such as America?

Astaghfir'Allaah, If you are, then what are you suggesting be done with those like myself who freely accepted Islaam and practice it peacefully?

Subhana'Allaah, are you suggesting that countries such as America should embrace a new kind of 'McCarthy' era?

Allaah willing, are you suggesting that I should be banned from being a son to my christian mother and grandmother on the grounds that I am practicing muslim?

Allaah willing, if so, where would you have me go?

This is not only the land where I was born, it is the land of my fathers who were here long before Cortez, Columbus, or John Smith.

Allaah willing, if you are not suggesting that those like me should be relocated, what exactly are you suggesting then?

Allaah willing, I seek refuge in Allaah and may He protect me (and those like me) from disbelief in Him, His Deen (Islaam), and His Final Messenger, Muhammad (Peace and Blessings Be Upon him). Ameen.

Allaah willing, are you suggesting that I should be forced to relinquish my belief and practice of Islaam?

Allaah willing, I mean no disrespect. I am just hoping that you clarify your position so that I can understand you correctly.

May Allaah guide us all to righteous moral conduct. Ameen.

Ah how peacful - young Muslims learning the Quran. Looks like their study has advanced into the ahadith literature.

This response was far too slow in coming.
It is an indication of weakness on the part of constituted authority to protect the innocent.
And the innocent here is clearly the child who was threatened.

Quote:
Allaah willing, are you suggesting that I should be forced to relinquish my belief and practice of Islaam?
end quote.

No.
We take very seriously the religious decisions of the individual.
The individual has rights.
The community does not.
The association does not.
The government does not.
This site is concerned with principles, with communities, and with the conflict between Islam and Western Civilization--one that existed long before Hernan's landing.
If you have any keep knowledge of what is called "The West", the conflict is self-evident and deep.
It will be centuries, perhaps even millennia, before any part of it is resolved. Rest assured, though, the religious diversity of the world will be protected.

I'm not sure where you learned to communicate, but we're adults here. So I'll tell you that messages of the following kind will not be posted:

"I bet you guys are SCARED to post this message! You won't DARE! I CHALLENGE you to post this link. If you don't post it, you must be COWARDS!"

This sort of nonsense can only come from a juvenile mind. Learn to discuss things like an adult, and you won't have any problems posting comments.

No I don't think that facebook is the problem. The problem is in the British troops, who are not on their lands and not in their countries, and have went their to "save the innocent Muslims" by killing a huge amount of them, although that is not considered a crime (as those who are killed by British soldiers as Muslims, which means they are dispensable).
As for these children, these are really sick children, and of course we can blame Islam (as it is an easy cause for people like you), but would you please help me in understanding the presence of thousand of bullies all around the world who are non-Muslims (maybe Muslim effect was strong on those too!!!!!)